In the 1977 Christmas episode "Earthanasia" (sometimes called "The End of the World Show"), the Goodies learn of the world's impending destruction. While doing the ironing Tim laments that it's the end of the Muppets, and hopes they won't suffer. Graeme then informs him that they're not real, "just dollies." "How can they sing and dance and make sophisticated remarks then?"

Graeme uses the bits of laundry to explain that Kermit the Frog is a man on his knees with a green sock on his hands (doing a vocal Kermit impression welcoming audiences to The Muppet Show, complete with flailing arms). Tim thinks Miss Piggy must be real, but Graeme counters, "A pair of wide fronts and a mop head," who refers to Kermit as "frog of my heart." Fozzie Bear? "A wooly jumper with a hat on," who hopes "those two old guys" don't heckle me. The latter are represented by two pink sponges (speaking in Waldorf's voice). Then a multicolored scrub brush accosts Tim in the face while shouting "Animal!"

Tim protests it's all lies. Finally, Graeme reuses the green sock as Robin the Frog earnestly singing "Halfway Down the Stairs," causing Tim to scream and grab the sock in horror. 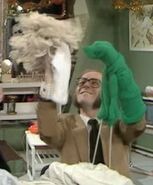 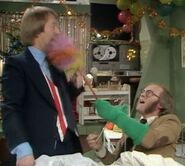 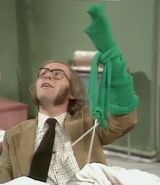 Robin sings "Halfway *up* the stairs"
Add a photo to this gallery
Wikipedia has an article related to:
The Goodies (TV series)
Retrieved from "https://muppet.fandom.com/wiki/The_Goodies?oldid=1077733"
Community content is available under CC-BY-SA unless otherwise noted.