The Great Muppet Caper is the second in a series of live-action musical feature films starring the Muppets.

In the story, Kermit the Frog and Fozzie Bear play the roles of twin brothers (yes, twin brothers) who are newspaper reporters for the Daily Chronicle. Accompanied by Gonzo as their photographer, they are assigned to investigate the theft of a valuable diamond necklace from fashion designer Lady Holiday. They travel to London, England to interview her, but without any money for travel, they're forced to fly in the baggage hold of an aircraft and are thrown out of the plane as they arrive over Britain. They stay at the ramshackle (but free) Happiness Hotel, run by Pops and populated by the likes of Scooter, Rowlf, and the Electric Mayhem. When Kermit seeks out Lady Holiday in her office, however, he instead finds her receptionist, Miss Piggy, and mistakes her for the fashion designer. Piggy falls in love with the little green reporter and masquerades as Lady Holiday, even going so far as to sneak into a ritzy house in order to impress Kermit with her dwellings, much to the surprise of the true British residents.

In fact, the jewel theft was orchestrated by Lady Holiday's nefarious brother Nicky, assisted by three of her put-upon fashion models. Despite Nicky's instant attraction to Miss Piggy, they successfully frame her for the theft and proceed to steal an even more valuable prize -- the coveted Baseball Diamond, which is on display at a local gallery. Kermit's crew, along with their friends from the Happiness Hotel, have no choice but to intercept and catch the thieves themselves in order to clear Miss Piggy's good name. Piggy, meanwhile, has escaped from prison and, in a bout of serendipity, finds a motorcycle which she uses to literally crash into the film's climax and help apprehend the lovestruck Nicky. The Muppets then return to America the same way they departed, being thrown out of the cargo hold and parachuting back to Earth as the credits roll.

A working title for the project was The Muppet Movie 2; Henson's notes in 1980 refer to the project as "MM2".[2] His original conception of the movie was fairly vague:

“From the beginning, Jim knew he wanted his film to be a homage to early movie musicals, "because I so enjoy those movies. I intended [the second Muppet movie] to have the fun and joy of those earlier films." He also knew he wanted Kermit to be a reporter-turned-detective who would have to compete with a rival for Miss Piggy's affections -- but typically, he was having a difficult time articulating the rest of his story, only vaguely directing that it be "joyful" with a "positive attitude toward life," and that it contain "several hilarious sequences [with] big laughs" as well as "some real emotions/relationships." He thought there might be a big chase at the end, and he was certain the movie would end with all the Muppets floating down in "parachutes -- everybody sings as they go down."[3]”

Muppet head writer Jerry Juhl was the first person to take a crack at a script, and in September 1979, Henson talked to Jack Rose, a comedy gag man and screenwriter who scripted several Bob Hope films, including Road to Rio and The Great Lover. Rose scripted the 1949 Dennis Morgan/Doris Day film It's a Great Feeling, a spoof of the Hollywood studio system that seems appropriate as inspiration for the fourth-wall-shattering Caper film. Juhl and Rose completed their first draft of the screenplay in January 1980, with a second draft in March titled The Muppets Hit the Road.[4]

Henson was unsatisfied with Juhl and Rose's script, and in April, he met with Tom Patchett and Jay Tarses, a writing team that had worked in the 1970s on a series of sitcoms, including The Bob Newhart Show, The Sandy Duncan Show, The Tony Randall Show, as well as the comedy-variety series The Carol Burnett Show. Patchett and Tarses did a rewrite of Juhl and Rose's script, which was delivered in June under the title The Good, the Bad and the Muppets. The final screenplay was completed in July, a composite of material from all four writers.[5]

The Muppet Show Fan Club newsletter (vol. 3, no. 2, 1981) had this description of the filming of The Great Muppet Caper:

“Watch for the shadow on the wall in Kermit's Fred Astaire dance number. It took 43 takes to get it right, the most takes needed for any shot in any movie.

Miss Piggy's underwater musical number was the most difficult scene to shoot, mostly because of communication problems. Lights, cameramen, cameras, speakers, monitors and Miss Piggy were all underwater. There were also 18 professional swimmers who had to dive into the pool at the right moment. We tried to get a dolphin to direct this part, but only one goldfish answered the ad.

So, the heat was on -- literally. We kept the water at 90 degrees Fahrenheit which made the air temperature a moist 95 degrees. The conditions were tropical! We then tried to get a director who also happened to be a monkey or a crocodile. One monkey applied, but he didn't like our terms (3 bananas/hour), and the crocodile ate his agent on the way to the studio.

We did almost all of our location shooting in England, working in and around London for about a month. Except for one rainy night, we never had to postpone shooting because of the weather. Then we went to "sunny" Albuquerque, New Mexico, and had bad weather half of the time! It just goes to show that you can't trust a cloud.

In Albuquerque, we shot the hot air balloon sequence which comes at the beginning of the film. It wasn't easy because there were so many variables. Kermit, Fozzie, and Gonzo went up in a genuine hot air balloon. If the wind blew, the balloon wouldn't go up. when the balloon did go up, a helicopter, with a cameraman suspended underneath it, followed it around. (We tried to find a bird to work the camera, but the chickens didn't like the idea and threatened to strike.) Occasionally, the helicopter would go above the balloon, forcing the hot air out and the balloon down, CRASH! An even more uncomfortable problem was filling the balloon with hot air. A burner was pushed up inside, and one time Kermit and Fozzie got singed! Gonzo, of course, loved it.”

Frank Oz commented on the effects in an interview for Dynamite magazine:

“The water ballet scene with Miss Piggy was really wonderful. I was under the water for a week. I had three days of scuba training and then down I went. Having them swim for the first time really was exciting!

It's amazing, though, you work and work on the most difficult things and people say, 'That's nice.' then something easy will occur and it will be all anyone talks about! In the first movie, it was Kermit riding a bike. It was very easy to do that. It was just a simple marionette with strings. In the same film, there was that whole complicated sequence with Gonzo in the balloon, crashing into the sign and landing in the car. It took forever to film that -- and all the talk was about the bike! That's why we have a whole bicycle parade in this film.[7]” 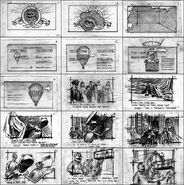 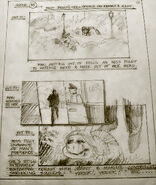 Gonzo takes a picture of a pigeon was cut.
Most of "Night Life".