The Great Muppet Movie Ride is an abandoned concept for an attraction at (what was then) Disney-MGM Studios in Walt Disney World.

The attraction, which was meant to parody the park's own Great Movie Ride, would have brought guests through a variety of set pieces in which the Muppets attempted to recreate scenes from classic movies, such as Frankenstein and Peter Pan. Statler and Waldorf would have been seated in a cart alongside the guests and would experience misfortune based on the different scenes.[1] An idea spoofing the snow scene in Dr. Zhivago would have seen Kermit the Frog and Miss Piggy in a plastic ball that's turned back and forth, while a Western-themed portion of the ride would feature horses making the sounds of galloping with coconuts tied to their hooves.[2]

Unlike the Great Movie Ride, which features scenes (and behind-the-scenes) loosely based on Hollywood movies, the Muppet version was conceived to explain the way movies are produced, with a typically Muppet spin. Speaking during the ride's development, Jim Henson explained, "It's the flip side of the rest of the Disney-MGM Studio, which tells you how movies are really made. We're doing it in the most stupid way possible, using lots of misinformation."[2]

Plans for the ride, which would have complemented Muppet*Vision 3D in a new Muppet Studios section of the park, were abandoned after the merger between The Walt Disney Company and The Jim Henson Company fell apart. 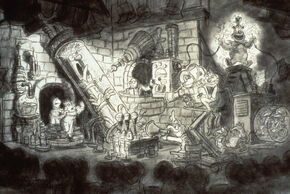 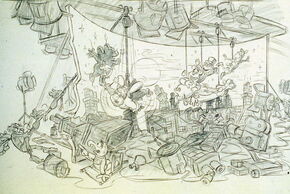 Peter Pan concept art
Add a photo to this gallery

Retrieved from "https://muppet.fandom.com/wiki/The_Great_Muppet_Movie_Ride?oldid=1077770"
Community content is available under CC-BY-SA unless otherwise noted.