The Hitchhiker's Guide to the Galaxy is the feature film version of Douglas Adams' franchise, previously incarnated as a series of radio programs, books, and a television series.

The Hitchhiker's Guide to the Galaxy is the story of a man named Arthur Dent, a man who finds himself caught up in events beyond his imagining. He frets over the destruction of his home, only to then end up on Vogon spaceship following the destruction of the planet Earth. Furthermore, he learns that his long-time friend Ford Prefect isn't even actually from Earth, but is instead a roving reporter for the Guide from Betelgeuse. Now, Arthur finds himself on an adventure that challenges everything he ever thought was true about the universe.

Jim Henson's Creature Shop supplied creature effects for such characters as Marvin the Paranoid Android, the Vogons, the Whale, and the Scintillating Jeweled Scuttling Crabs. Jamie Courtier was the project supervisor for the Creature Shop.

The Creature Shop's costume for Marvin the Paranoid Android was designed by Joel Collins and fabricated by Nicola Tedman and Paul Jomain. Made from fibreglass, the Marvin costume puppet weighed 55 pounds.

A highly detailed model sperm whale was created and filmed in free fall. Jim Henson's Creature Shop built an 11-foot-long model of the typically 50-foot-long marine mammal. Dave Dunsterville served as animatronic designer for the puppet. According to director Garth Jennings in the official presskit, "The whale that the Creature Shop created was truly beautiful... We shot it with an in-camera effect so it looks like it’s falling through the sky, and later we added just a couple of effects shots. But essentially the whole whale sequence was shot in camera. It looks so realistic—to me it’s as if we had a skydiver trying to film the whale as he was plummeting with it!" 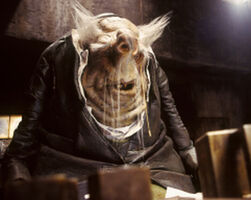 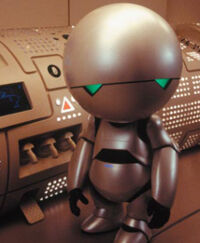 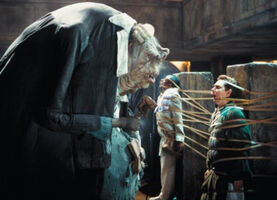 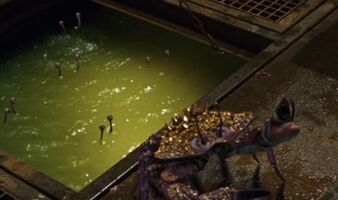 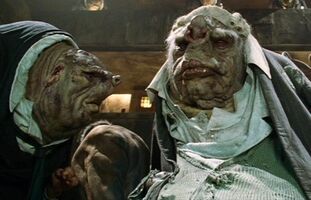 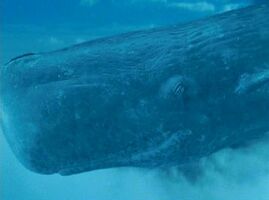 The WhaleBill Bailey (voice)
Add a photo to this gallery

Retrieved from "https://muppet.fandom.com/wiki/The_Hitchhiker%27s_Guide_to_the_Galaxy_(film)?oldid=1215806"
Community content is available under CC-BY-SA unless otherwise noted.