"The Holly and the Ivy" is a traditional Christmas carol. It was performed by Janice and Floyd in A Muppet Family Christmas.

As the casts of The Muppet Show and Sesame Street joined in for the chorus, the cast of Fraggle Rock (including Gobo, Red, Wembley, Mokey, and Boober) arrived in Emily Bear's living room to witness the Christmas festivities alongside Doc and Sprocket, as Uncle Traveling Matt pops up near them. 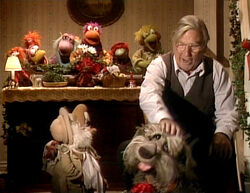 Add a photo to this gallery
Wikipedia has an article related to:
The Holly and the Ivy
Retrieved from "https://muppet.fandom.com/wiki/The_Holly_and_the_Ivy?oldid=1077835"
Community content is available under CC-BY-SA unless otherwise noted.