The Irish Rodents sing the opening number on episode 105 of Muppets Tonight while catapulting cheese including Swiss Cheese into a giant fondue pot. As the number draws to a close, the rats go skinny dipping in the vat of molten cheese. The group got its name based on the Canadian Irish folk group The Irish Rovers.

Other songs by the band, according to a vinyl record 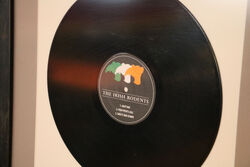 adorning a wall in PizzeRizzo, include "Salty Rat", "Pied Piper's Call", and "Take It and Scurry".

Retrieved from "https://muppet.fandom.com/wiki/The_Irish_Rodents?oldid=1344885"
Community content is available under CC-BY-SA unless otherwise noted.