During the opening number, "Don't Fence Me In," Rowlf the Dog instead tries to do "Mule Train," raising his whip to go "Pow pow pow."

Rowlf sings a verse of "Mention My Name in Sheboygan", and explains to Jimmy Dean that he learned the song at the Animal Actors' Academy. (Other graduates include Huckleberry Hound, Donald Duck and Trigger.)

Rowlf demonstrates his acting skills by performing a line from Hamlet, and then ropes Jimmy into a romantic scene, which culminates in a quote from Winston Churchill. Rowlf wishes that he could do that scene with Lassie ("On the luncheon special of life, she has made a tossed salad of my soul.") Jimmy assures him that he's invited Lassie to appear on the show, and Rowlf hopes he and Lassie could bring back vaudeville. Jimmy and Rowlf finish the sketch with a duet of "Song and Dance Man". 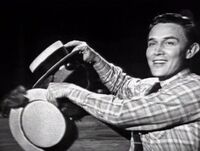