Rowlf the Dog appears during the opening saloon brawl number, "Hoop-Dee-Doo," as a bartender wiping down the counter.

Rowlf shows Jimmy Dean a large Valentine's Day gift he's received, from his dry cleaner (who used Rowlf's underwear to lace up the card). Rowlf is disappointed that he hasn't received anything from Lassie. Jimmy tries to cheer him up with some other cards written by "Lady Bird" Johnson and Nikita Khrushchev's wife ("Roses are red, violets are red...").

Rowlf tries phoning her in California instead, making a pass at the information woman. After he dials the inordinately long area code, he reaches Lassie's estate and hears the panting of another man (presumably Rin Tin Tin). It turns out to be Lassie's mother, who informs Rowlf that her daughter is out. Jimmy tries to pick up Rowlf's spirits by singing "The Glory of Love," while Rowlf sings "Makin' Whoopee." Just as they reach a climax, a cast member delivers a large gift for Rowlf - an autographed portrait of Lassie, with an inscription on the back telling them she'll be visiting next week's show. Rowlf is so elated he faints, then revives to finish the number. 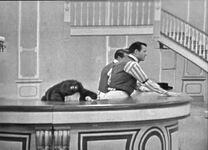 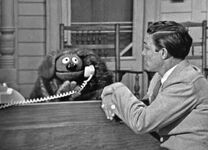 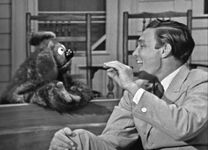 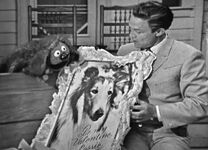 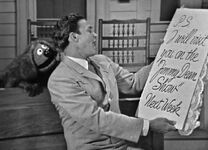 Add a photo to this gallery
Retrieved from "https://muppet.fandom.com/wiki/The_Jimmy_Dean_Show:_Episode_120?oldid=1263548"
Community content is available under CC-BY-SA unless otherwise noted.