In the opening, Rowlf the Dog is washing the window of a train station during the "Wabash Cannonball" opening number.

Later, Rowlf is writing a letter to Dear Abby as Jimmy Dean comes by with a kitten he picked up in the alley. He plans on adopting it and naming it Fluffy. Rowlf thinks that he's giving him up for the cat, and immediately greets it with trepidation. Jimmy speaks in baby talk to the kitten, and tries to convince Rowlf that cats are nice to have around.

After Jimmy threatens to release it outside into the fold, Rowlf finally holds Fluffy and begins speaking in baby talk. Jimmy assures Rowlf that he'd never let a cat get between them, and they end the segment with a duet of "Let's Be Buddies" from Cole Porter's Panama Hattie. 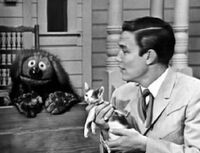 Add a photo to this gallery
Retrieved from "https://muppet.fandom.com/wiki/The_Jimmy_Dean_Show:_Episode_125?oldid=1101700"
Community content is available under CC-BY-SA unless otherwise noted.