Rowlf the Dog crops up during the opening number, "The Yellow Rose of Texas," waving a flag of his own.

Rowlf is struggling with his income tax forms. Jimmy Dean claims to look forward to paying his taxes, and he critiques Rowlf's mathematics. Rowlf also paid $1,000 dollars to have an appendix put in ("48 stitches"). His owed income tax is one dollar, which Rowlf refuses to pay. Jimmy suggests without it, they'd be unable to send a rocket to the Moon.

Feeling patriotic at the idea of planting the American flag on the moon, Jimmy and Rowlf sing "You're a Grand Old Flag." Jimmy tells Rowlf to stick around, since he has a surprise for him at the end of the show (but asks Rowlf to take the bench he sits behind off with him).

At the end, Jimmy presents Rowlf with a letter from the United States Air Force Recruiting Office in Ridgeway, New Jersey. Rowlf has been made an official Air Force Recruiter to select dogs for the Air Force sentry program. 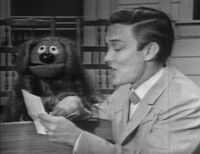 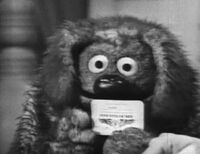 Add a photo to this gallery
Retrieved from "https://muppet.fandom.com/wiki/The_Jimmy_Dean_Show:_Episode_128?oldid=1263556"
Community content is available under CC-BY-SA unless otherwise noted.