Rowlf appears, dressed in a beret and carrying his suitcase and travel itinerary. He tells the audience he plans on spending his summer vacation in Europe. Before he leaves, Jimmy tries to make sure he has everything in order. He's shocked to see that Rowlf's hastily-made passport has a bikini shot of Sophia Loren instead of Rowlf's photo.

Rowlf seems to know little about the different currencies of Europe, all while claiming to speak many different languages. Jimmy tries quizzing him on his Italian vocabulary, but Rowlf responds in a stereotypical Italian accent ("Hey, goomba! Which-a way to the pizzeria?!"). Rowlf also isn't aware that he cannot rent a car and drive through Venice because of the canals.

Rowlf states that after Italy, he'll be visiting Spain and plays the role of a toreador. He also says he'll be visiting Paris and performs an Apache dance with his Raggedy Ann doll. Jimmy takes up Rowlf's invitation to tour Europe with him and the two sing "The Happy Wanderer." 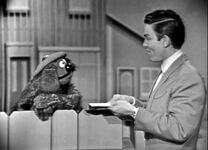 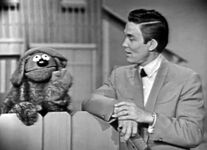 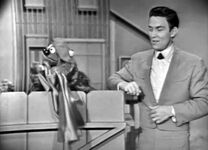 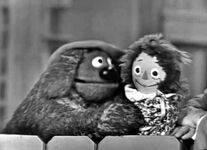 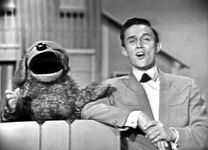 Add a photo to this gallery
Retrieved from "https://muppet.fandom.com/wiki/The_Jimmy_Dean_Show:_Episode_230?oldid=1263590"
Community content is available under CC-BY-SA unless otherwise noted.