Jimmy informs the viewers not on the East Coast about the water shortage they've been experiencing, and how Rowlf is attempting to remedy the situation.

Rowlf is seen with a weather map and points out that their lack of rain is due to a front of hot air coming from Washington, D.C. Rowlf tells Jimmy his plan to make it rain in New York City - move the Pacific Ocean over the city and empty its contents over Time Square. Jimmy not only finds the idea impossible, but points out the water would be too salty to drink. Rowlf has a solution in mind and gives Jimmy a cup of salt water to drink, then applies his secret formula - pepper - to overpower the taste.

Jimmy tries explaining to Rowlf that the drought is a serious problem, especially for those who depend on farming. Rowlf proposes they water crops with milk instead; Jimmy calls the idea udder nonsense. Rowlf then produces a bowl and starts preparing an old, gypsy rain potion, which winds up being just a mix of alcohols. Says Rowlf, "Jimbo, you drink this and you don't care if it ever rains!"

Jimmy tells Rowlf to give up his effort, but Rowlf begs for once last scheme. He ducks down and returns with a tribal headdress, originally worn by Big Chief Soggy Socks, who made it rain for six whole months before dying (by drowning). As Rowlf does a rain dance, Jimmy answers a ringing phone; a weather man informs him that a downpour has started upstate. Jimmy doesn't believe the news until the receiver squirts him in response. It begins to rain in the studio, as the two duck under Rowlf's umbrella and start "Singin' in the Rain." 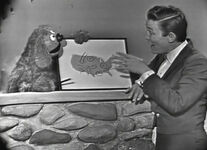 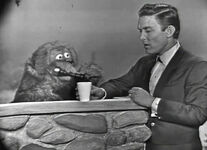 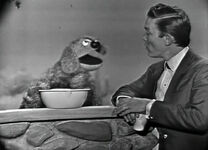 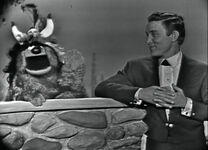 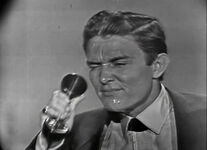 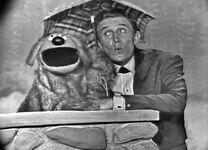 Add a photo to this gallery
Retrieved from "https://muppet.fandom.com/wiki/The_Jimmy_Dean_Show:_Episode_302?oldid=1263585"
Community content is available under CC-BY-SA unless otherwise noted.