"Now, from Hollywood, it's the Jimmy Dean Christmas Show!" The usual country set is now covered in snow and adorned by pine trees. After the opening number, Jimmy Dean chats by the fireside with Charley Weaver (played by Cliff Arquette). Dressed as Santa Claus, Charley even mentions his gifts for Rowlf the Dog: sessions with a Beverly Hills psychoanalyst (even though he's not allowed on the couch) and a long thin bone (he can eat it or play pool with it).

For Rowlf's own spot, he's writing a letter to Santa, asking for teeth to go with his electric toothbrush from last year (and extra large earmuffs for Jimmy Dean). Just to mess with Jimmy, though, Rowlf pretends he doesn't believe in Santa (and has no knowledge of him). Rowlf says he hasn't hung up his stocking and finds the idea of a stocking full of sugar plums and gum drops to be a gooey mess. Rowlf wonders who would leave the candy anyway. "Come on, Rowlf, you know. The jolly old fellow who comes through the air into millions of homes all over the country." "Lawrence Welk!" "Jimmy asks, "Don't you believe in that little old fat man who comes down the chimney and says ho ho ho?" Rowlf believes the little old fat man who always says "I just got a letter from Mama in Mount Idy" (referencing Charley Weaver's routine). Jimmy tries to explain Santa's workshop at the North Pole ("What some people won't do to get away from unions") and his sled pulled by reindeer. "What?" "Reindeer." Rowlf puts his paws affectionately on Jimmy and says, "I don't care if it snows, darling" but again asks who pulls the sled. Jimmy names some of the reindeer ("Vixen, Blitzen, Dancer, and Prancer! That's a law firm!") It doesn't help when Jimmy brings up Rudolph the Red-Nosed Reindeer: "Eight sweet little reindeer, and their leader is a wino!"

Jimmy finally gives up, at which point Rowlf asks Jimmy to mail his letter to Santa Claus: "This is no time of year to write to Lawrence Welk." Rowlf then sings a sincere rendition of "Have Yourself a Merry Little Christmas" solo to Jimmy Dean. Later in the show, Jimmy thanks Rowlf for the song and notices the dog reading A Christmas Carol, which he thinks is by Little Jimmy Dickens. Jimmy Dean corrects him, but the dog says, "Jimmy, Charles, the Dickens with it!" Rowlf is dismayed because the book doesn't have John Wayne. Jimmy says if he wants John Wayne in A Christmas Carol, he'll get it, and segues to introducing Rich Little doing his all celebrity impression version of the story. 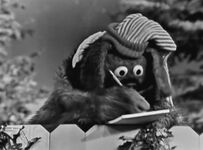 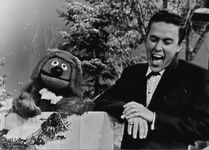 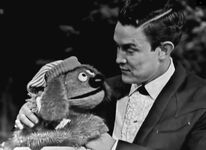 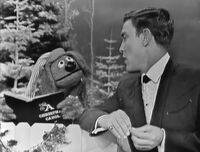