As Rowlf's signature theme plays, Jimmy Dean announces that this time it's not to introduce his ol' buddy. It's to herald a new hero at whose name the underworld trembles: Batdog!

Spoofing the Batman TV series (which premiered a month prior on January 12), Rowlf cavorts to the orchestra's version of the Neal Hefti theme before telling them to "cool it." He then summons his dopey assistant, Dobbin (Jimmy Dean). Dobbin utters assorted holy exclamations (at one point saying "Holy mackerel, Andy" ala the Kingfish of Amos 'n Andy) as Batdog relates the prison escape of arch criminal the Midget (when he tries to cash a check, he's a little short).

While Dobbin is sent off (as Batdog plans to leave town in disguise), our hero reports to the commissioner on his Batphone (with batwings on the side). He uses the codename Hot Dog by mistake, then has to explain to the commissioner that the one who escaped prison was the Midget, not Gidget. While Batdog describes the Midget (who stole thirty million dollars), the fiend himself (Dean again) enters. Tapping the canine ("Hold it, commish, I think Avon is calling."), the Midget rejects his plea for mercy and tries to devise the most fiendish torture ("tie me to a phonograph and play a Jimmy Dean record.") The Midget chooses hand to hand combat, initially scaring our hero ("Are you a man or a mouse?" "I'm a bat and a dog.") but he agrees.

The villain distracts him first by claiming Superman is on his way to rescue him ("I don't see me old pal Soupy.") While he's looking the other way, the Midget plans to fight dirty. While melodrama chase music plays, hero and villain fight behind the wall while battle words appear onscreen, as on the Batman series. In addition to Pow and Zonk, the phrases include Oy! and Zlerp! (both of which Batdog reacts to). A disheveled Midget, beaten by our hero, re-enters in a punch-drunk manner. Batdog makes him swear to tell him where he hid the thirty million dollars, and not to tell anyone else: "I now pronounce us partners."The two then sing an abbreviated version of "Friendship." 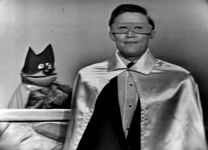 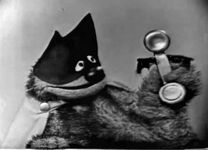 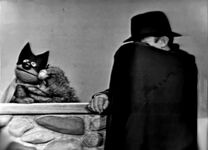 Add a photo to this gallery
Retrieved from "https://muppet.fandom.com/wiki/The_Jimmy_Dean_Show:_Episode_320?oldid=1263617"
Community content is available under CC-BY-SA unless otherwise noted.