The Karate Kid was a 1984 film following in the vein of the Rocky movies, about an underdog high school student who trains under his apartment's handyman, Mr. Miyagi, to win the heart of a girl and ward off the attacks of her ex-boyfriend. The film spawned a franchise including multiple sequels, and an Academy Award nomination for Pat Morita as Mr. Miyagi. 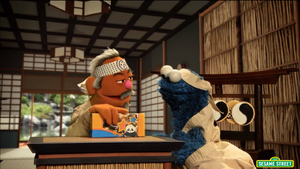 "The Biscotti Kid"
Add a photo to this gallery

Wikipedia has an article related to:
The Karate Kid
Retrieved from "https://muppet.fandom.com/wiki/The_Karate_Kid?oldid=1284130"
Community content is available under CC-BY-SA unless otherwise noted.