The Legend of the Doozer Who Didn't is a 1984 Fraggle Rock book.

A rhyming Doozer Storyteller tells a group of young ones the legend of a Doozer who just didn't feel like working. Growing up The Doozer Who Didn't was like the other Doozers. He liked to play in the Radish Dust Glen, and he worked hard in school. He decided to sleep in, disregard his job, and just play around all day long. As the legend goes, he became fat, grew fur, and became a Fraggle. This, the Storyteller says, is the basis for the Doozer theory that "a Fraggle is born when a Doozer must play," and thus the moral of the story (for the audience of young Doozers) is to stick to school and work, or you too may become a Fraggle. 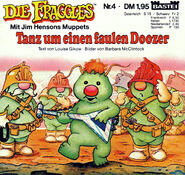