The Merv Griffin Show was a long-running talk show hosted by Merv Griffin; its best known incarnation ran in syndication from 1972 until 1986.

Jim Henson, Frank Oz, and their Muppet characters were guests on a special episode which aired on July 19, 1984, titled "Merv Griffin Salutes the Muppets," to promote The Muppets Take Manhattan.[2] Kermit and Miss Piggy join Merv in singing the "Theme from New York, New York" as the opening number. While showing a clip of their marriage in the movie, they banter about their relationship, joke about having baby "figs" and Piggy admits to having done commercials for bacon early in her career (she would later do this for real in a commercial for Denny's). Jim and Frank present a Muppet rock music video version of "I'm Gonna Always Love You" by the Muppet Babies. Rowlf sings "Down Memory Lane" and "You and I and George". Kermit and Merv help Fozzie try out his new material, and Kermit tries to conduct an interview between Merv and Animal. The show ends with a sweet duet version of "Saying Goodbye" by Kermit and Miss Piggy. 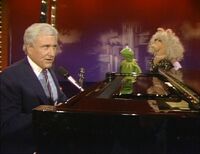 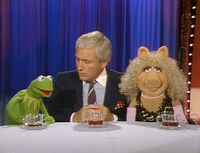 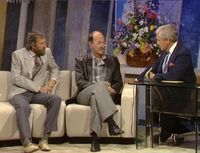 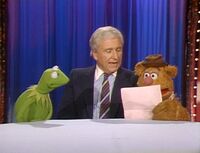 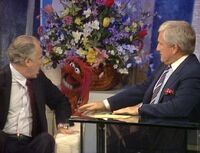 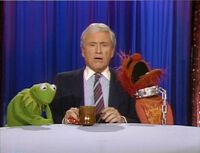 Retrieved from "https://muppet.fandom.com/wiki/The_Merv_Griffin_Show?oldid=1191973"
Community content is available under CC-BY-SA unless otherwise noted.