The Monster at the End of This Book

The Monster at the End of This Book was published in 1971 by Golden Press. It was written by Jon Stone and illustrated by Mike Smollin.

In this book, Grover is horrified to learn that there is a monster at the end of the book and begs the reader not to finish it, so as to avoid the monster. He uses several methods to try and keep the reader from progressing, including tying the pages shut and cementing them together with bricks. After each page is turned, the results of the failed effort is shown, and Grover tries a new method to keep the reader from turning yet another page. To the amusement and relief of Grover, the monster at the end of the book turns out to be none other than himself, leaving the latter very embarrassed over what he has just gone through.

In its first year of publication, the book, which is one of the first to star Grover, sold two million copies. According to an internal Children's Television Workshop newsletter, "this figure, according to publishing sources, is an all-time one-year sales record for a single book."[1]

The book's style, with Grover speaking directly to the reader in comic book-style word balloons, was used in other 1970s and early 1980s Sesame books, including Grover and the Everything in the Whole Wide World Museum (1974), Oscar's Book (1975), Would You Like to Play Hide & Seek in This Book With Lovable, Furry Old Grover? (1976), Big Bird's Red Book (1977) and Lovable Furry Old Grover's Resting Places (1984).

An animated special based on the book, The Monster at the End of This Story, premiered in 2020.

A sequel, Another Monster at the End of This Book, was published in 1996. It was also written by Stone and illustrated by Smollin, and features Grover and Elmo as the other monster at the end of the book.

In 2006, Random House published an "interactive" version of the book, Please Do Not Open this Book!, which included moving parts and flaps.

On January 30, 2013, Sesame Street's official Twitter feed was taken over by Grover, who is told there's a monster at the end of the Twitter conversation, with a blacked out photo of Grover slowly being revealed with each tweet. The conversation included a shout-out from Grover to actor Wil Wheaton who retweeted and commented on the live-stream of tweets.[2]

The 2013 DVD Being Brave is framed with sequences of Grover trying to avoid the "Monster at the End of This Show." The onscreen title and ending text are based directly on those from the book. Some of Grover's dialogue is lifted straight from the original story, adapted by Christine Ferraro. Behind-the-scenes footage of the sequences being filmed was posted on the Sesame Family Robinson blog in July 2011. 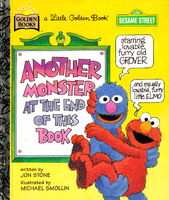 Another Monster at the End of This Book 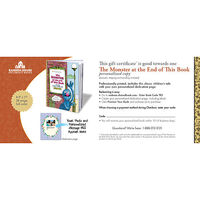 Please Do Not Open this Book! 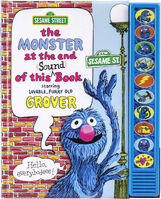 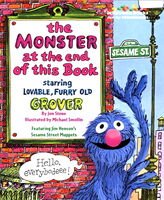 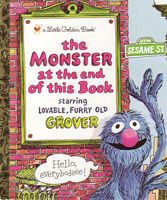 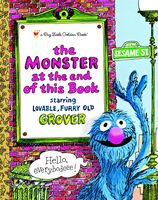 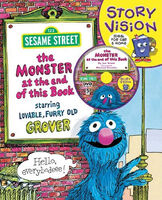 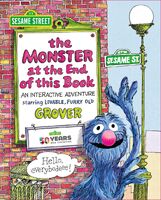 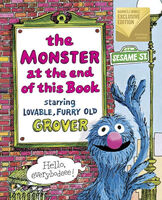 In 2009, Hinkler Books released the book with a StoryVision DVD adaptation of the book. Grover (Eric Jacobson) narrates the story as a child's hand (played by Edward Dix) turns the pages. Smollin's original art inspires the animation by Neil Goodridge.

On December 7, 2009, Sesame Workshop released the book as an audio-enabled free eBook with highlights.[3]

In 2010, iTunes released a special animated version of the book for iPad. Like the StoryVision DVD adaptation of the book from 2009, this version is once again narrated by Eric Jacobson as the voice of Grover.

In 2012, Amazon Digital Services released a Kindle edition of the book. 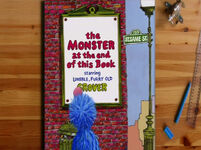 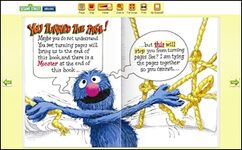 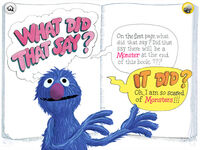 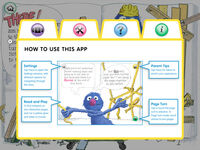 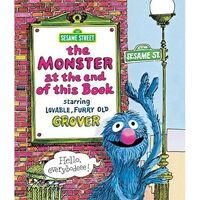 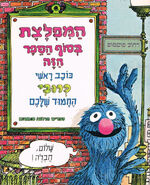 “The Monster at the End of This Book written by Jon Stone and illustrated by Michael Smollin and published as a Little Golden Book in 1971. Here Sesame Street's Grover begs the reader not to turn the pages because it will bring him closer to the monster at book's end; all the more reason of course to keep going. Grover tries to prevent the reader's advance with ropes, wood and bricks. Hilarity ensues when the reader turns out to be stronger than Grover ever expects. Of course Grover's bete noir turns out to be himself. A great first metafiction reissued by LGB a few years back, just for my kids apparently.”