The Muppaphone is a musical instrument made up of pink and orange living balls of fluff. These creatures, members of an as yet unnamed species, are played by Marvin Suggs, who strikes them with mallets in order to elicit the cries of pain that form the Muppaphone's music ("Ow, ow, ow, ow..."). Each creature is tuned to make a single note, like a xylophone. Whenever the Muppaphones complain over being hit or try to tell on him for any reason, he yells at them to "shut up".

Marvin Suggs and the Muppaphone first appear in The Muppet Show episode 105, playing "Lady of Spain." The names of several of the creatures are revealed in this episode; one is named Marvin. In their debut episode, the Muppaphone creatures have drooping pink eyelids. The creatures were later redesigned with circular open eyes, suggesting a more alert and frightened appearance.

Although Marvin Suggs appears without the Muppaphone in episode 208, he returns to the instrument in episode 304, singing "Witch Doctor."

In episode 311, Kermit interviews Marvin and the Muppaphone in a Talk Spot that appears as a UK Spot. Kermit asks the Muppaphones the question that most people ask: "Does it hurt?" Since Marvin Suggs is right behind them, they nervously answer, "No." When asked if these are the original Muppaphones, Marvin says that he has to replace them every two or three months, since by then go flat (not off-key; they become two-dimensional). Kermit asks what happens to them after that. Marvin replies, "I don't think you want to know."

In episode 315, guest star Lesley Ann Warren is horrified to learn that Marvin is the accompanist in one of her numbers. She accuses him of being cruel, because he makes music by hitting live creatures. "Of course they are alive!" he answers. "You cannot make music by hitting dead creatures!"

Individual Muppaphone creatures appear in Episode 117, in Ben Vereen's "Imagination" number. Kermit and Fozzie find one of them in The Muppet Theatre's attic in the Playhouse Video The Muppet Revue. A few of them were used in one of the Macy's windows in 2002.

The Muppaphones were reunited with Marvin Suggs in the 2011 film The Muppets. They re-appeared in Muppets Most Wanted, and again in The Muppets episode "Because... Love‎‎."

The Muppaphone creatures were reproduced in plastic form as pack-in figures for the Marvin Suggs Action Figure in 2004.

In print, they appear with Marvin Suggs in Jim Henson's Muppet Show Bill. A Muppaphone can be seen sitting on a shelf in Two for the Show.

The Muppaphones had various roles on Mopatop's Shop, mainly during Mopatop's introduction for the episodes where they said a specific sound that fits their name. 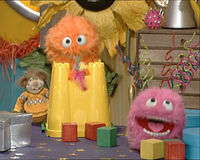 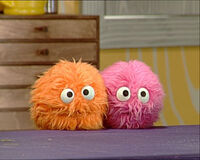 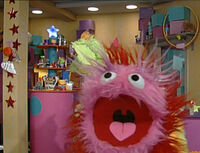 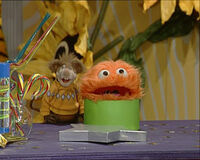 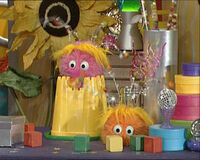 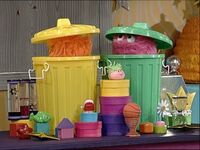 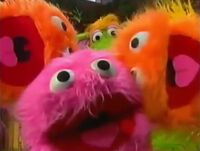