The Muppet Alphabet Album was the first Sesame Street album that was hosted solely by the Muppets without assistance from the human cast. It was originally packaged in a gatefold sleeve, featuring visualizations of each letter of the alphabet by Smollin Associates. The original package contained 26 small punch-out letter-shaped books illustrating the songs, plus a letter-shaping pipe cleaner, a blackboard and chalk. The songs from this album were also released on seven consecutively numbered 45-rpm, 7-inch records. The album was also released simultaneously on a "Carry About" boxed set of 45s. The LP edition reached #189 on Billboard's Top LP's chart in early 1972. The album was nominated for a Grammy Award for Best Recording for Children, but lost to the cast album from The Electric Company.

The 1976 reissue dropped the inserts, and the gatefold contained new "Learn Your Letters" artwork which did not directly correspond to the content of the songs. In 1977, the album was reissued as part of the 3-LP boxed set, Letters, Numbers and Signs.

This album was reissued many times over the years on records, cassettes and 8-tracks, sometimes with slight title changes. More recently, a new CD and cassette edition was released, under the title Sing the Alphabet, with some minor changes (see below for details).

* this track is known to have been performed on the show

On some later non-record editions of this album, the following section of dialogue has been cut from the end of side 2, after Big Bird says, "What's the alphabet?" and everybody groans:

Big Bird: Hey, if they turn the record over, won't we all fall off?

Then the closing music plays, on all versions. 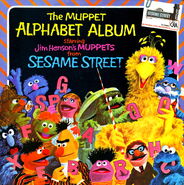 Released in 1996, Sing the Alphabet is a retitled CD and cassette reissue of The Muppet Alphabet Album. The opening and closing dialogue tracks from the original album are included. The opening is combined with "The Sound of the Letter A", and the closing, which is combined with "The Zizzy Zoomers," omits some dialogue mentioning that this is a record album (see "Edits" section above). This version of the album opens with a new recording of ABC-DEF-GHI, sung by Elmo, and includes a lyric booklet.

This album was reissued on CD by Koch Records on March 4, 2008. The re-released album included the same track listing; however, it featured new cover art. 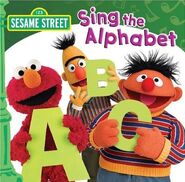 Retrieved from "https://muppet.fandom.com/wiki/The_Muppet_Alphabet_Album?oldid=427230"
Community content is available under CC-BY-SA unless otherwise noted.