The Muppet Show: Season One

In addition, the set contains all twenty-four UK Spots, sketches that were not initially intended to be aired in the United States and that have only been seen in selected reruns, compilations, and home video releases.

Several edits made to the episodes due, in part, to music licensing issues, are detailed below. Most of the edited episodes appear fully intact on the German release, including the optional English sound track.

The main menu of each disc features rotating blocks that reveal character images while an instrumental version of "The Muppet Show Theme" plays. Statler and Waldorf (Steve Whitmire and Dave Goelz) appear on the menu to heckle the viewer with new video footage produced for the DVD set. Statler and Waldorf crack jokes at the expense of the show, and sometimes reference to the viewer's reluctance to select an option on the menu. 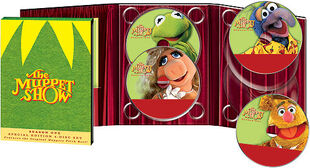 In North America and other regions, a limited run of a "furry" felt-covered box was created for the initial release. Subsequent printings of the set featured a flat cardboard box with the same design. The discs feature Kermit, Miss Piggy, Fozzie, and Gonzo laid in a overlapping digipak-style design decorated to look like the curtain from The Muppet Theatre.

In the United Kingdom, the box set has the option to hear The Muppet Show in French on all 24 shows; Charles Aznavour and Peter Ustinov dub their own voices in these episodes.

The following segments were cut as presented on this DVD set:

In addition, Kermit's closing line was cut from "The Original Pitch Tape." At the end of the original pitch, Kermit appeared and inquired, "What the hell was that all about?"

The German release presents most of the episodes intact, with the exception of the missing Newsflash segments in the Joel Grey episode. 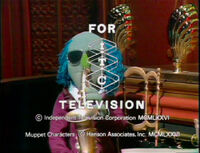 An eight-second "Muppet Studios" logo with music is shown before each episode. There are no chapters within each episode, but there is a "play all" feature on each disc. Due to ownership change, the original closing shot of Zoot with the ITC logo is not included on this set. Instead, the episodes feature a shot of Zoot from the 1980s with The Muppets Holding Company information. 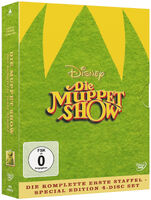 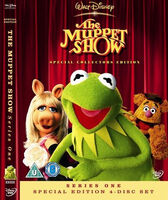