The Muppet Show: Season Two is a four-disc DVD set collecting all twenty-four episodes of the second season of The Muppet Show for the first time. Similar to the first season set, the DVDs are dubbed a "special edition" release, and select copies have a fuzzy cover.

Inside back cover
Add a photo to this gallery 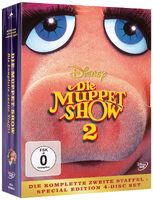 UK 2012 reissue
Add a photo to this gallery

Retrieved from "https://muppet.fandom.com/wiki/The_Muppet_Show:_Season_Two?oldid=1365181"
Community content is available under CC-BY-SA unless otherwise noted.