The box and board design are decorated with illustrations of the Muppet Show cast, including some characters that are not typically seen on merchandise: Nigel, Mildred, Beauregard, Robin the Frog, Link Hogthrob and Sopwith the Camel.

This game is played by two to four players. Players travel around the board seeking opportunities to audition for a spot on The Muppet Show, in front of judges Miss Piggy, Fozzie Bear and Sweetums. The first player to receive seven stars from the judges is the winner.

The game contains a board, four colored player makers, six Sam the American Eagle cards, a number of star markers, 18 Judge cards, a die and an instruction manual. 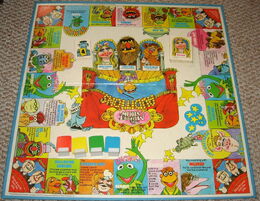 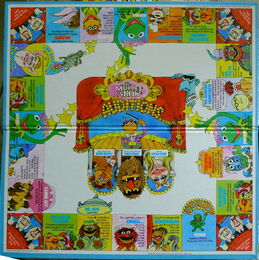 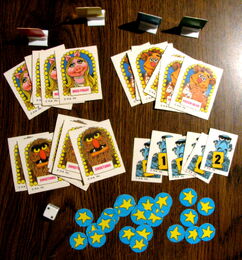 Add a photo to this gallery
Retrieved from "https://muppet.fandom.com/wiki/The_Muppet_Show_Board_Game_of_the_Stars?oldid=1078192"
Community content is available under CC-BY-SA unless otherwise noted.