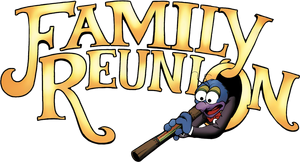 "Family Reunion" is the second story arc in The Muppet Show Comic Book series, comprising issues #4-7. The story is written by Roger Langridge and drawn by Amy Mebberson. This was the first story arc in which the individual issues don't have their own title.

The main plot line of the story arc has the Muppets reunited with Scooter's sister, Skeeter, making a rare appearance in adult form. Although Skeeter is present in all four issues, each issue has focus on a different Muppet relative (Skeeter in part 1, Andy and Randy Pig in part 2, Robin the Frog in part 3, and Ma Bear in part 4). With the exception of Robin (whose own story ends with an appearance by an unknown Muppet relative), each relative was not a major character on The Muppet Show (Ma Bear appeared in two episodes of the series).

In addition to the family reunion theme of the story arc, each issue begins with two celestial beings who may or may not be Statler and Waldorf controlling the events of the issues by playing with chess pieces resembling the characters, bringing in new pieces to cause more chaos. According to Roger Langridge,

“Our friend, the lovely Mr. Jim Lewis, requested that we make Skeeter’s appearance on the show a little bit ambiguous as to whether it was happening “in continuity” or not. The chess sequence was my way of addressing that – is it real or isn’t it? Well, it’s as real as you want it to be. That celestial Statler and Waldorf aren’t “our” Statler and Waldorf, exactly – I figure they’re a character type that pops up throughout the universe (see also the population of Little Statwald and the film producers in the Pigs in Space issue). I didn’t show the regular S&W in their usual box to stop it getting confusing. One set of those guys is enough![1]”

The issue begins with two celestial beings who resemble (but are not[2]) Statler and Waldorf playing a game of chess, with pieces resembling the various Muppet characters. After thinking it can't get more chaotic, the one resembling Statler says they have to put something new into the game to make it more chaotic, and that new element is Scooter's sister, Skeeter, who comes to the theater to apply for a job.

Kermit decides to make her a stagehand, and has her first duty be to get Miss Piggy, who had become angry and locked herself into her dressing room, to come out of her dressing room, which she succeeds in doing. Scooter starts to get jealous of his sister solving everybody's problems instead of him, and also has conflict with her as she continually calls Scooter a nerd.

Skeeter agrees to help Gonzo with his cannon-shooting act, but when Gonzo trips over an anvil, Skeeter has to go on in his place. She flies form the cannon and lands safely into a vat of tapioca pudding, but then becomes surprised when Gonzo thanks Scooter instead of Skeeter; Turns out that Scooter had used math calculations to make sure the cannon was positioned correctly so that she'd land safely. Skeeter apologizes for calling Scooter a nerd, and the two go out for dinner.

A running gag starts where Anson Anderson has Sweetums throw anvils for him to catch, but cannot catch them. Finally, Sweetums throws it up so high that it vanishes, which leads to running gags with a falling anvil (such as Rizzo in the background holding up an umbrella to stop water from falling on him, but something much bigger comes down).

Sketches include Samlet, Muppet Labs, and Pigs in Space.

The two celestial beings once again try to make things more chaotic, so they bring in Andy and Randy Pig. At the theater, Miss Piggy informs Kermit that the two pigs are coming to the theater after a misunderstanding (Piggy previously asked them to play in the creek, but the two, wearing corn cobs in their ears, misheard it as an invitation to visit for a week). Andy and Randy arrive having trouble getting the door open, and when Skeeter opens it for them, they consider her a genius.

After angering Miss Piggy by their mistakes, Skeeter suggests they get Miss Piggy a thank-you gift for inviting them to the theater. They raise money by doing odd jobs around the theater, getting paid in advance under the condition they leave as soon as they are done.

After the show ends, Andy and Randy give Miss Piggy her gift: A voucher for two weeks at Gracious Acres, the nation's leading charm school. But this only angers her further, as she thinks they think she's not elegant enough, but they say it was all Skeeter's idea.

The two celestial beings decide to add an element to their game, in the form of a mysterious cross-eyed lady who is completely unknown to the rest of the cast.

Meanwhile, at the Muppet Theater, Robin starts to feel a little unappreciated when Skeeter notices the cross-eyed woman looking at Robin and taking notes. She notices that her bag says "C.O." and assumes it means "County Orphanage". Later, Kermit asks Robin to take up a collection (a duty that Piggy quit doing), and Robin starts to wonder if he'd be better off at an orphanage. He eventually asks Beauregard to take over when he has to perform on-stage, and after the performance, Skeeter tells Robin that she heard the cross-eyed lady mention that the moving truck will arrive at the theater tonight.

Later, Robin and Skeeter overhear Kermit and the cross-eyed lady talking, and come to the conclusion that Kermit is in on having Robin sent to an orphanage. Robin then decides to run away from home, and Skeeter agrees to accompany him. They meet a bum, Short-Sighted Billy Silverfish, who (accompanied by members of The Gogolala Jubilee Jugband) sings a song about his homeless life, which prompts Robin to decide he'd rather be at an orphanage than homeless. As Robin and Skeeter leave, it's revealed to the reader that Short-Sighted Billy Silverfish is actually Kermit (who had overheard them talking earlier) in disguise.

Robin confronts the lady, who reveals that the "C.O." on her bag stood for "Carpet Overstock", that her Acute Strabismus (or "Cross-eyedness") makes her appear to be looking at many things she isn't looking at, and that the only notes she had been taking were measurements for a new carpet. Afterwards, Kermit let's Robin join him in the closing number.

After the closing number, Robin wants to tell Kermit about how he often has to help around the theater and how unappreciated he feels about it, but before he can Kermit tells Robin that the collection they were making earlier was to buy Robin a new bike as a way of saying "thank you" for all the little work Robin does around the theater. He says that Beauregard worked twice as hard to collect the money needed, and remarks that someday he'll have to ask Beauregard what his secret is. After everybody leaves, Beauregard thanks his identical Cousin Mo for helping him.

On-stage acts include "Walk Like a Chicken" with Gonzo and the Chickens, The Frog Scouts in an all-mine production of "Death of a Salesman", Wayne and Wanda singing "Mighty Like a Rose", "Pigs in Space", and a closing number featuring Kermit and Robin, backed by Dr. Teeth and the Electric Dustbin. A running gag involves characters being seen by their legs only. The "A" cover shows a close-up of Robin with other characters, who due to Robin's size are only seen below the waist. An early scene shows a member of the audience sitting upside-down. Another early scene shows Robin sorting prop legs (and asking how many are really needed). And two sketches involve a baby carriage, containing a baby monster whose only visible features are its feet, as well as a massive fist from the Wayne and Wanda sketch.

Fozzie gets a letter from his mother, informing him that she'll be visiting the theater, and plans on reuniting him with a former childhood acquaintance. This makes Fozzie nervous, because he had told her that he's a detective's assistant (to the legendary Wormwood Soames, in fact), and also worries that his mom will want to set her up with his old friend, so Skeeter agrees to pretend to be Fozzie's girlfriend. However, upon meeting Fozzie's mother, Skeeter claims to be Wormwood Soams as well.

Meanwhile, the two celestial beings notice game pieces that neither of them had put into their game, realising that their game has taken a life of it's own. They decide to sit back, watch how it plays out, and talk about it to their grandchildren.

Back at the theater, Fozzie learns that his childhood friend Dora will be coming to watch the show. Fozzie and Skeeter check behind a curtain and think that a big bear sitting behind Fozzie's mom is her (Fozzie hadn't seen Dora in years). Fozzie drags Skeeter on-stage for a musical performance, thinking their boyfriend-girlfriend act would be more convincing if they did something on-stage together. Dora arrives during the performance, and they see that Dora is quite attractive.

After the performance, Fozzie admits that he is not really Wormwood Soames' assistant and that Skeeter isn't really his girlfriend. Fozzie's mom then convinces him that she was proud of him for accomplishing his dream of becoming a comedian despite not being rich and famous. Afterwards, Skeeter becomes inspired to go back to college, and upon leaving the theater, she gets a new mission from the real Wormwood Soames.

Sometime later Scooter gets a letter from Skeeter, in which she admits that she is actually Wormwood Soames' assistant while also attending college. However, they think she is just trying to impress them. Skeeter tells Wormwood about her visit, but states that Scooter wouldn't believe what she left out, as a variety of chaotic events ensue in the area. In the background, the celestial Waldorf throws the chess game off a cloud.

Sketches include "Wormwood in Bohemia", A Poem by Rowlf, Pigs in Space, "Sweet, Sweet Music", and "The Adventures of Baron Munchfozzen".

In 2011, Marvel Comics reprinted the collection in a larger format (newsstand magazine size) with a variant cover.