A one-shot comic based on Pigs in Space is the #0 issue of the ongoing Muppet Show Comic Book published by BOOM Studios. It is written by series regular Roger Langridge with art by guest artist Shelli Paroline.[1] This issue was later included in the trade paperback of The Muppet Show Comic Book: On the Road.

Issue #0: Pigs in Space: The Movie

Fozzie and Rizzo pitch the "Pigs in Space" movie to two studio executives who are gradually revealed to be Statler and Waldorf. Referred to by Rizzo as "Flash Gordon meets Animal Farm," the story also features references to Star Wars (include an appearance by Han Solo and Greedo) and visual nods to Futurama and Mystery Science Theater 3000.

Traditional Muppet Show sketches are incorporated into the storyline, including Muppet News Flash, a news report from Koozebane by Kermit the Frog, and Muppet Labs. 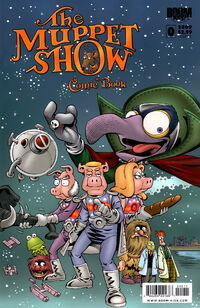 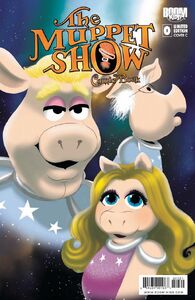 cover C
(Amy Mebberson)
Add a photo to this gallery 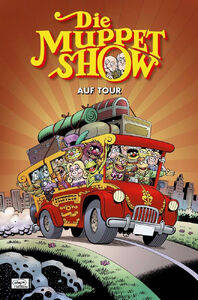 Retrieved from "https://muppet.fandom.com/wiki/The_Muppet_Show_Comic_Book:_Pigs_in_Space?oldid=1277545"
Community content is available under CC-BY-SA unless otherwise noted.