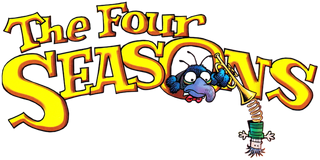 "The Four Seasons" is the fourth story arc in the Muppet Show Comic Book series, and the final arc written and illustrated by Roger Langridge.[1][2] Marvel Comics released the first issue on July 4, 2012.[3] "The Four Seasons" arc features a different seasonal theme in each of the 4 parts.

Although originally planned for release in late 2010, the release was delayed. In February 2011, BOOM! Studios announced that they would no longer carry the Muppet comic license; it was later announced that Marvel Comics would be picking up publishing rights and reprinting the original Meet the Muppets comic book. BOOM! Studios founder and CEO Ross Richie released the following response regarding the comic:

“I’ve said it before and I’ll say it again, the team at Marvel are a group I respect greatly and consider friends. It’s exciting to see them republish Harvey Award-winning BOOM! content from the incomparable Roger Langridge. Susan Butterworth and the entire Muppet Studios team are fantastic people, and they were a joy to work with. With any luck, Roger’s unpublished FOUR SEASONS arc will find success on their publishing schedule.[4]”

The guest stars are the team of Colonel Marmaduke Bunch and Meredith the Mountain Gorilla, whom Floyd Pepper refers to as "the greatest primate-based song-and-dance act in showbiz." Meredith and Animal fall for each other, to the dismay of her former lover, Bruce. Animal ends up leaving her after she ruins his drum set from playing too rough, and she gets back together with Bruce. 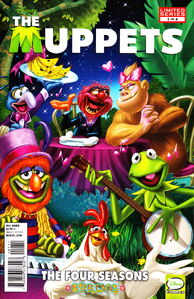 #1 Spring
Add a photo to this gallery

The Muppets do a show at the beach. Before they head for the beach, Fozzie gets a letter from The Whatnot Theater, offering him a summer position. Fozzie accepts, but since he and Scooter were supposed to do an act together, Scooter has to audition a replacement. Although it's summer, it eventually snows, right as Scooter found a replacement in Frosty the Bear, a polar bear.

Meanwhile, at the Whatnot Theater, Fozzie finds that the cast is very similar to the Muppets. Fozzie learns that his gig is as a replacement for the resident bear, Ozzy, who's leaving because of a bigger opportunity. Fozzie eventually returns to the Muppets, since many of the Whatnots believe their show to be what performers do before something better comes along, while Fozzie always saw what he does as what he is, but wouldn't have it any other way. 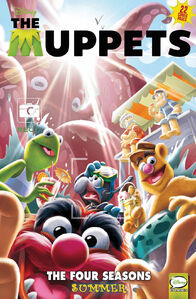 #2 Summer
Add a photo to this gallery

Pops gets a letter from the Stage Doorman Union informing him that union rules require him to retire at his age, something he doesn't really want to do. Pops trains his nephew, Nat Crotchet, to take over his duties, while Gonzo gets the gang together for a meeting, where they intend to switch Pops' birth certificate and then distract the union before they notice the name is not his. However, nobody at the theater has their birth certificate -- except for Miss Piggy, who's not thrilled with having to use her birth certificate, yet she also has to go through several files to find it.

Eventually, Pops finds his birth certificate, and it turns out he's five years younger than he thought he was (Pops had stopped celebrating his birthday and forgot how old he actually was) and doesn't need to retire. Nat reveals to Kermit that Pops lied about his age when he joined the army, but suffered memory loss and mistakenly thought he really was the age he lied about being. Nat had found Pops' real birth certificate and came to switch it in his office for Pops to find, a skill he had learned when he was a spy (which he had failed to mention to the others). 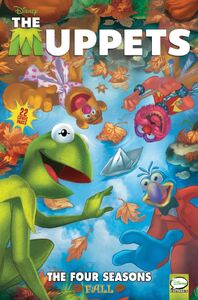 #3 Fall
Add a photo to this gallery

For Christmas, Miss Piggy orders mistletoe and schemes to get Kermit under the misletoe with her. Meanwhile, as Kermit doesn't want to get Miss Piggy a gift (as Piggy will assume anything he gets her will have some significance) he decides the Muppets will all have secret Santa's, but Kermit ends up drawing Miss Piggy's name, and vice versa. 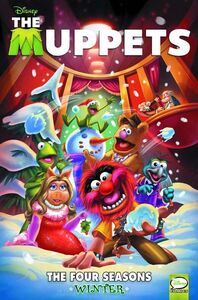 #4 Winter
Add a photo to this gallery

#14 pencils
Add a photo to this gallery

Retrieved from "https://muppet.fandom.com/wiki/The_Muppet_Show_Comic_Book:_The_Four_Seasons?oldid=1239167"
Community content is available under CC-BY-SA unless otherwise noted.