The Muppet Show Comic Book: The Treasure of Peg-Leg Wilson 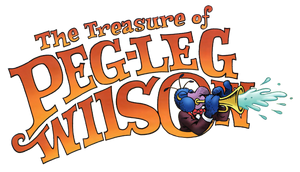 The Treasure of Peg-Leg Wilson is the second 4-part comic book mini-series published by BOOM! Studios as The Muppet Show Comic Book. Based on the television series The Muppet Show, the series is written and illustrated by Roger Langridge.

Langridge says that the comic is a continuation of his previously published mini-series under that title - with similar style, setting and tone. In a 2009 Q&A Langridge stated:

“As far as my work schedule is concerned, The Muppet Show Comic is an ongoing monthly series, but BOOM! Studios want to re-start the numbering every four issues for marketing reasons. So the next four-issue story arc is called "The Treasure of Peg Leg Wilson", in which rumors of a hidden treasure inside the theater lead to, one hopes, hilarious complications -- all this as a background subplot to the usual songs, sketches and so forth. Nothing radically different to the initial four issues, except the subplot element is a bit stronger. And that will lead us into the next four-issue arc, which is a logical progression from this one, I hope."[1]”

A trade paperback was published in January, 2010, reprinting the four issues in one volume.

Scooter discovers old documents which reveal that a cache of treasure is hidden somewhere within the theatre, and when Rizzo the Rat overhears this, the news spreads like wildfire. Meanwhile, Animal begins acting very strangely - he's now refined and well-mannered![2]

Sketches include Muppet Sports, the Swedish Chef, Wayne and Wanda ("When the Lusitania Went Down"), Muppet Labs, Pigs in Space, At the Dance, and a musical number by Miss Piggy backed by Dr. Teeth and the Electric Mayhem with special guest drummer Ninja Rogers.

Issue #2: You May Meet a Stranger

Due to the buried treasure, Kermit decides to have a pirate-themed closing number. He instructs Gonzo to go to the library and do some research on who Peg-Leg Wilson was. Meanwhile, it's revealed that Kismet and Rizzo have been working together and planning on splitting the treasure, but then Kismet decides that he'll split it with whoever finds the treasure first, who could be the dwarfs he has working for him. Kismet also reveals that he's after Miss Piggy's jewelry. Kismet comes to Piggy's rescue in a melodrama, "The Perils of Piggy", and tells her that he wants to see her in her jewelry. Miss Piggy is soon dressed in a lot of gold jewelry, but the dwarfs run after her. They soon realize that the gold and jewelry are fake, and they leave her locked up behind the wall. With Piggy seemingly missing, Link talks Kermit into using the robotic Piggy that was in the shows "Pigs in Space" sketch during the closing number, "H.M.S. Pinafore", in which the cast sings "I Am the Very Model of a Modern Major General" (or, in this case, "We Are the Very Model of a Band Upon a Treasure Hunt"), using a very expensive set on loan. Unfortunately, the robotic Piggy runs amok and destroys the set, costing Kermit thousands of dollars.

Meanwhile, The Electric Mayhem attempt to get Animal back to normal by instructing him to hit several fleas thrown at his drums, expecting him to become a wild drummer again. However, Animal has become a Buddhist, and is not allowed to harm living beings. The fleas put on an act on Animal's drum set, "Julius Prunes Amazing Flea Circus", and they later give Animal a trophy for being the only guy who was ever kind to them.

The search for treasure starts to cause damage to the theater. Meanwhile, the Electric Mayhem decides to drop Animal as their drummer, replacing him with a drum machine. A saddened Animal recalls that Bunsen told him that he can stop his treatment whenever he wants, and Animal gives up his pills, quickly becoming his old self again. Kermit finds Rizzo and reminds him that the theater is more than just a theater; it's Rizzo's home. Rizzo tries to tell the other rats to stop, but they won't listen.

Meanwhile, Kismet tricks Bunsen and Beaker into leaving the laboratory so that he can steal Bunsen's latest invention, x-ray glasses, and use it to find the treasure. Kismet finds that the treasure is in the basement. However, as soon as he finds the treasure, Miss Piggy shows up with a cop, telling him to arrest Kismet for replacing her jewels with shabby fake replacements. Kismet tells her that the originals turned out to be fake as well, but Piggy is aware of this; She just thought hers were the best fakes money could buy.

A monster named Rumpelstiltskin is ordered by a dwarf to smash a pillar, which will destroy the whole theater and make the treasure easy to find (not knowing that it had been found). Kermit, Fozzie, and Gonzo all tell him that if he wants to break down the theater, he'd have to get through them. Rumpelstiltskin is about to do so anyway, until Miss Piggy informs everybody that the treasure's been found. As they are about to open the treasure chest, Animal crashes through the theater on a construction ball, destroying the theater. All that's in the treasure chest are letters written by Peg-Leg Wilson and his wife, which, after reading the letters, makes them realize that the theater itself was the treasure.

Soon, the stamps on all the letters end up being worth the exact same amount as the costs to repair the theater, and Kermit decides to take The Muppet Show on the road, but can only afford to travel to four towns.

On-Stage sketches include "A Young Frog's Guide to Stamp Collecting", "Muppet Labs", "Veterinarian's Hospital", and an act from Gonzo.

In 2011, Marvel Comics reprinted the collection in a larger format (newsstand magazine size) with a variant cover.