The Muppet Theater is the setting for The Muppet Show -- a grand old vaudeville house that has seen better days. In episode 106, Kermit identifies the name of the theater as The Benny Vandergast Memorial Theater, although by the time of It's a Very Merry Muppet Christmas Movie, it is simply called "The Muppet Theater."

According to The Phantom of the Muppet Theater, the theater was built by a stage actor named John Stone in 1802. At some point a production of Hamlet ran in the theater, with Stone playing the title role. An alternate exterior is also shown in the book. The original exterior can be seen at the end of The Muppets Go to the Movies. It was renovated by the time of It's a Very Merry Muppet Christmas Movie.

Locations seen in the Muppet Theater are backstage right, the dressing rooms, the attic, the canteen, the prop room, the storage room, the boiler room, the stage, the house, the stage door lobby, and the back alley. In The Comic Muppet Book and Bo Saves the Show there is also a cellar where the monsters stay in.

Scooter's uncle J.P. Grosse owns the theater, and rents it to the Muppets, as Scooter is only too happy to remind Kermit. In a deleted scene from It's a Very Merry Muppet Christmas Movie, Kermit reveals that J.P. has passed away and left the theater to the Muppets. This would have taken place sometime after 1997, as J.P. can be seen (and referred to as such by the head of the KMUP network) in Muppets Tonight episode 102 and was last seen at KMUP in episode 206.

According to the events of It's a Very Merry Muppet Christmas Movie, as of December 24, 2002, the theater is an Official Historical Landmark. It can never be torn down nor changed. It will always remain the Muppet Theater, no matter who owns it.

The theater also appears in the 2011 film The Muppets, where it's located next door to Muppet Studios. The exterior of the El Capitan Theatre served as The Muppet Theater exterior during filming, providing it with the British English spelling, "The Muppet Theatre." Production designer Steve Saklad was charged with re-creating the theatre interior. The set itself was reworked from a 1925 set built for The Phantom of the Opera. Of the task, Saklad said:

Eventually they transform this — this nasty looking place into the sort of glory days of the Muppet Theater. Now I should explain, the — the theater was very important to us to get right. In the old TV show, there’s a simplified version of a kind of Muppet Theater. It’s kind of sweet and quaint; not very real looking. Our story is this: Once, there was a real Muppet Theater; great old, 100-year-old, Vaudeville Theater with ghosts and history, and these great acts that had always played there. 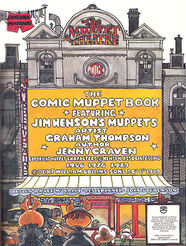 The Muppet Theatre [BE spelling], exterior, as depicted in The Comic Muppet Book. 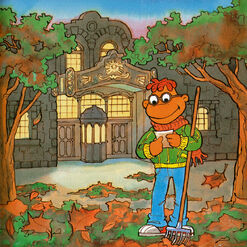 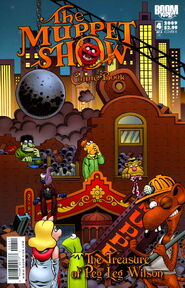 In The Treasure of Peg-Leg Wilson, Rizzo destroys the theater, resembling the illustrated version in The Phantom of the Muppet Theater.
Add a photo to this gallery

Retrieved from "https://muppet.fandom.com/wiki/The_Muppet_Theatre?oldid=727484"
Community content is available under CC-BY-SA unless otherwise noted.