The Plymouth Muppet Traffic Safety Show was a touring attraction brought to shopping malls around the US in the late 1980s, sponsored by the Plymouth division of Chrysler Motors. Children would ride in a minivan through a Muppet-filled movie set, teaching them various lessons about traffic safety. The children were filmed during the ride, and the ride ended with a showing of their own mini-movie.[1]

The attraction featured the first fully animatronic versions of the Muppets, before Muppet*Vision 3D. The Muppet characters included Kermit, Miss Piggy, Fozzie Bear, Gonzo, Animal, Beaker, Robin the Frog, the Frog Scouts, a chicken (crossing the road) and some penguins. The show included a song, "Play It Safe." The audio track for the attraction was recorded by Jim Henson, Frank Oz and Jerry Nelson.

The attraction begins with Kermit dressed as a crossing guard, welcoming the passengers and waving them through a tollbooth. Gonzo is the filmmaker, operating a camera in each of the six scenes. In the first scene, Miss Piggy is on the curb in front of an ice cream shop, and teaches the kids that you should look "left-right-left" before crossing the street. Fozzie Bear told the old "why did the chicken cross the road?" joke, with a chicken preparing to cross. In another scene, Animal demonstrated why darting out into traffic was dangerous, riding out of an alley on a Big Wheels-style toy bike. In another, Gonzo talked about bus safety as a group of penguins exited a school bus. Robin and the Frog Scouts appeared in a Plymouth Voyager minivan, demonstrating the importance of buckling your seatbelt. Beaker also also had his own scene.

The tour launched at the Eastland Mall in Harper Woods, Michigan on May 20, 1988, and was scheduled to tour the country for three years.[3] Tour locations included: 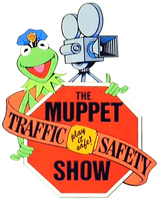 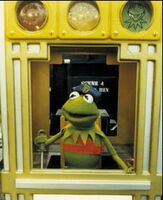 Kermit at the crossing guard booth 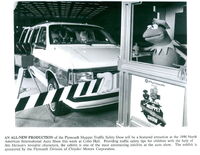 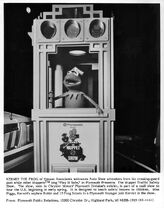 Miss Piggy and the Penguins 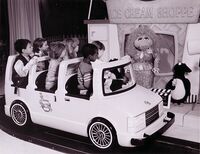 Fozzie Bear, asking why the chicken crosses the road 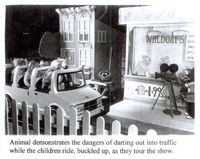 Animal shows why darting into the street is dangerous 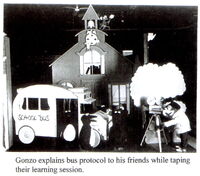 Gonzo films, as penguins get off the school bus 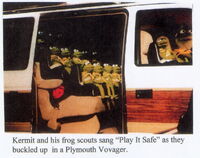 Robin and the Frog Scouts sing "Play It Safe". 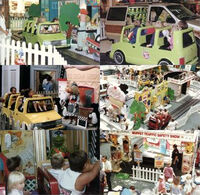 Photos from the ride, including Beaker's scene 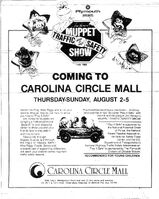 Retrieved from "https://muppet.fandom.com/wiki/The_Muppet_Traffic_Safety_Show?oldid=1205620"
Community content is available under CC-BY-SA unless otherwise noted.