The Jim Henson's Muppets comic strip first premiered in over 500 daily newspapers on September 21, 1981, just months after The Muppet Show ended its five year run. The strip was created by brothers Guy and Brad Gilchrist, who drew and wrote the strips, and distributed through King Features Syndicate.

The Jim Henson's Muppets comic strip was printed daily from 1981 to 1986 in over 660 newspapers worldwide. Special strips were also created in color, exclusively for issues of Muppet Magazine during its run.

The strip is notable as being the first comic strip in history to be syndicated in multiple countries starting on the very first day of publication. Guy Gilchrist described working on a world-wide comic stating: "We had to work twice as far in advance as anyone else in our business at that time, because our strips had to be shipped via airmail and messenger (prior to the internet, of course) all around the world to be translated into every language of the 80 countries that read us each day. We had to be extremely aware of the global marketplace. We couldn't, for instance, write any 'puns' or English language wordplay. It couldn't be translated, you see."[1]

Six, incomplete books were released collecting some of the later strips.

The strip changed focus considerably, after the first few months. The early strips treated the comic as an extension of the show, with "on-stage" and "backstage" scenes, all taking place in the Muppet Theater. The characters talk directly to the reader, as they would to the audience of the show -- the Rowlf the Dog strips on October 24th and November 7th, 1981, feel like gags that could have been on television with no change at all.

There's a sequence from Nov 16th to Nov 26th about Gonzo discovering a team of dancing worms, which includes a scene between Kermit and Miss Piggy before her big musical number, then a strip that shows the number, and ending with a Kermit/Piggy scene after the number. The entire 10-strip sequence mimics the story structure of a Muppet Show episode.

The early strips also featured familiar sketches from the show, including Veterinarian's Hospital, Pigs in Space and Bear on Patrol.

The art changed quite a bit as well. The strip originally had a more naturalistic style that was patterned directly off the puppets, and on the work of Michael Frith. As time went on, though, Guy became more confident drawing the characters and the strip became more stylized and simplified, capturing the essence of the characters in this new medium. Guy's version of Kermit can be recognized by small horizontal lines around his smile, which persisted in Guy's licensing work for Muppet Babies.

As the Gilchrists grew more confident, the concept of the strip moved away from the Muppet Theater and the vaudeville show, and started to focus on the Muppets' everyday lives. By February 10th and 11th, 1982, the Muppets are seen out on a hill in the middle of the night, looking up at the stars. By March 1982, the majority of strips take place in restaurants, in the park and in the characters' homes. Rowlf still appears as Dr. Bob, but he's Kermit's personal therapist, not participating in a sketch on stage. Over time, the theater-bound strips become the exception.

In 1983, Enesco released a line of coffee mugs featuring artwork from the comic strip.

In 1984, President Ronald Reagan and First Lady Nancy Reagan invited Guy to be guest of honor at the "Easter at The White House" celebration. Later that week, Guy’s Muppets artwork was permanently enshrined in the Smithsonian Institute. Guy’s Muppet artwork was chosen to be part of the touring Art of the Muppets exhibit and has appeared in museums worldwide.

Gonzo recommends the book Moving Right Along by Guy and Brad Gilchrist at the end of the 1990 special The Muppets Celebrate Jim Henson. 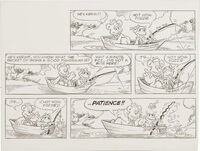