The Muppets Kitchen with Cat Cora 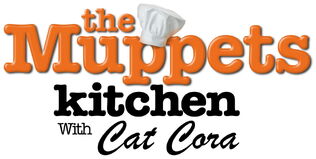 The Muppets Kitchen with Cat Cora is a web series starring celebrity chef Cat Cora and the Muppets that debuted online on September 13, 2010.

The series was co-written by Craig Shemin and Elise Allen,[1] and was said to feature topics like "Food You Can Eat with Your Hands Night" and "Food That Gets Caught in a Mustache Night," as promoted at the D23 Expo in 2009. The show features new Muppet Chef Angelo.

"Hasty Tasty Cooking Tips with Cat Cora & the Muppets," another show featuring leaner episodes, both in length and cast, airs on the same channel, as well as on Family.com. Hosts Cat Cora, Angelo and Pepe star, while a chicken appears sporadically.

Throughout the series the Muppets constantly make references to how Cat coincidentally already has everything they want to make on the show previously made, calling it "the magic of the Internet."

In 2011, The Muppets Kitchen with Cat Cora was nominated for a Webby Award in the Online Film & Video category for "Comedy: Long form or series". The program used to be sponsored by the Got Milk? advertising campaign and by Honda. 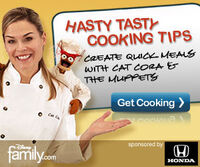 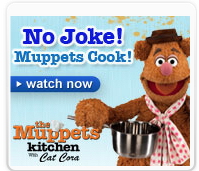