"The Muppets Take Over Today" is the title given to a special appearance made by The Muppets on Today on November 13, 2008.

As the Muppet half hour begins, while Matt Lauer, Al Roker, and Meredith Vieira pound on the door to be let back on, the camera cuts to Muppet Meredith and Muppet Matt on the couch, mentioning what's coming up on the broadcast, including two of Washington, DC's leading political pundits giving their take on President-elect Barack Obama's cabinet picks, Christopher Meloni discussing how he makes his work relationships work on- and off-the-job, and Harry Connick Jr. is set to play a song from his Christmas album. They then throw to news, after which Lester Holt (filling in for Ann Curry) throws to Al for the weather. Muppet Al asks an audience member where they're from, asking "What's your name, ma'am?", then stating "That's a great name", without giving her time to talk. He throws to local weather. Afterwards, Muppet Willard presents the Smuckers 100th birthdays, with pictures of four Muppets.

Back in New York, the real Matt, Meredith and Al argue with Bobo the bear, who is working security. Bobo reads Matt's personal ID, asking "Is this your current address, Mr. Lawyer?" The hosts correct him, saying "Lauer". Hearing their correction as "Louder," Bobo continues to mispronounce the name in a progressively louder voice, until cracking at them. In Studio 1A, the set of the show, the Muppet hosts throw to Muppet Ann, who is supposed to be in a "far flung" place, for their Ends of the Earth series on Today. Muppet Ann is in Dean & Deluca Coffee and Tea, a shop visible from the Today plaza. She explains that Bobo told her that Linny needed a pumpkin spice latte. Bill Barretta and Craig Shemin are sitting at the same table at the store.

After a commercial break, the segment begins in the control room, with mostly rats at the switches. The hosts are asked to remove their shoes, as Meredith is frisked by Bobo's wand. She flirts with him, but he catches on, and forces her up against the wall. Muppet Ann arrives with the coffee, and is asked to pick up cupcakes. Statler and Waldorf present a "Picks for Obama's Cabinet" segment, offering their two cents, "which is exactly how much change we have left in our retirement accounts." Their picks:

The Muppet hosts do a teaser for Christopher Meloni (Law and Order: SVU) and Miss Piggy (Law and Order: E-I-E-I-O). Cut to a dressing room, where Meloni says he's glad to meet her, but unsure why the two of them would be on together to discuss relationships; Piggy tells Meloni about how she feels he lusts over her. Cut back to the Muppet hosts, unsure what's taking Meloni and Piggy so long. Cut back to Piggy, who has wrapped Meloni in crime scene tape. Cut to the actual hosts, including Al, who tackles Bobo so they can enter the studio. Cut back to the Muppet hosts, who tease Connick's segment, and throw to break.

After commercial, the hosts meet up with Kermit backstage, who says that he's been waiting for them for a half hour. Pokey, signaling for Connick's segment, says "Take five". The rats interpret this to mean to take a break, and scurry off. The director remarks, "there goes my Emmy." Cut to Connick and the Muppet hosts; Connick is sure something is different from normal, but can't identify what it would be. He starts to play "Winter Wonderland" from his Christmas CD What a Night. The hosts and Kermit enter after one verse, and Kermit eventually explains that the Muppet hosts are Whatnots, and how as supporting players, they couldn't resist being in the spotlight. The hosts head to a Whatnot Workshop in the studio, where they meet three featureless but moving Whatnots. Kermit describes Meredith's creation as a "Marty Feldman Whatnot", due to its outward pointing eyes.) The three Muppet hosts on the couch throw to break, but there is still time left. (The Muppet Matt recognizes the mistake and exclaims that all he does is read the prompter.) The hosts fill time by changing the Whatnots appearances, before the Muppet hosts throw to break again. 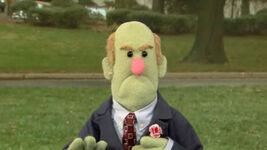 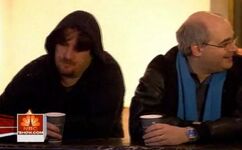 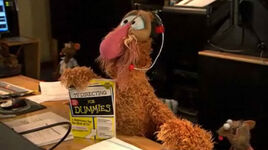 Pokey in the control room. 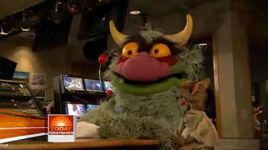 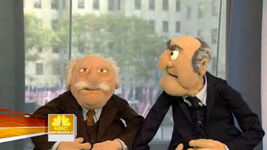 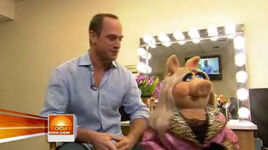 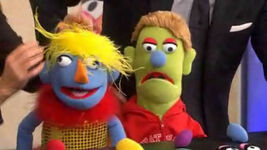 A Whatnot with Feldman-like eyes. 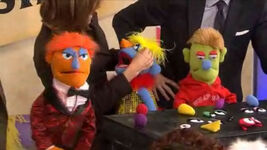 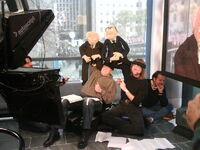 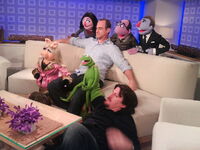 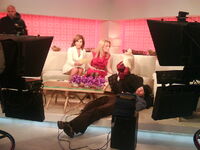 Behind the scenes
Add a photo to this gallery

After the half hour

A yellow Whatnot, which Meredith suggested was a caricature of Linny Boyette (a frequent audience member on the plaza), appears behind the barricades. Meredith mentions her tradition of kissing Linny as being the first thing she does on entering the plaza, and proceeds to kiss him and then the Muppet.

Willard Scott, appearing to present the 100+ birthdays, mentions how he did commercials for Schindler's peanut butter, giving Kermit spoonfuls of the product.

During the fourth hour of the show, Miss Piggy chats with Kathie Lee Gifford and Hoda Kotb. Gifford continues to insult Miss Piggy throughout her appearance, calling the diva "bacon in a dress and faux fur". 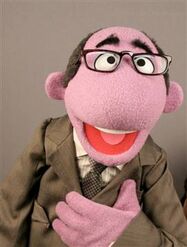 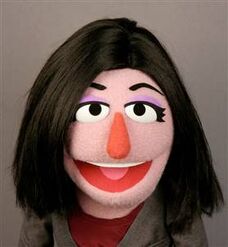 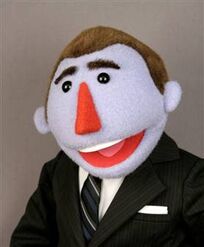 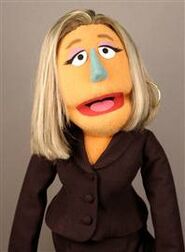 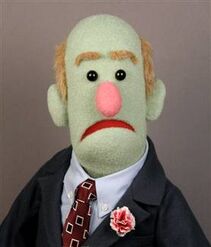 Willard Scott
Add a photo to this gallery

Retrieved from "https://muppet.fandom.com/wiki/The_Muppets_Take_Over_Today?oldid=1231675"
Community content is available under CC-BY-SA unless otherwise noted.