The Odd Old Man is a magical Spiderfly who appeared in the Fraggle Rock episode "Wembley's Flight."

When this Spiderfly is helped out of trouble, he turns into a beautiful Fairy Godmother... or at least he is supposed to. Instead, he appears to Wembley as an "odd old man."

The Spiderfly has the ability to grant wishes, and keeps strict account of all wishes that he grants. Wembley tries to wish for a toasted radish sandwich, but he is convinced that he wants the gift of flight instead.

The Spiderfly character is not specifically named in the episode, but he is referred to as "the Odd Old Man" in The Encyclopedia Fragglia. 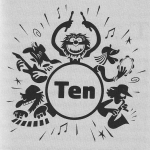