The Official Sesame Street 2 Book-and-Record Album was the second record album of Sesame Street songs to be released. It was originally packaged in a gatefold sleeve that contained a 24-page book featuring illustrations done in comic book style by Michael Smollin, as well as lyrics to all of the songs (also done in comic book style). The package also included a sheet of stickers depicting various characters and song titles on the album, and a sheet of Sesame Street signs that could be punched out. The album was simultaneously issued as a boxed set of four extended play 45s, which included smaller versions of the book, stickers and signs. This album peaked at #78 on Billboard's Top LPs chart in early 1972. It was also nominated for a Grammy Award for Best Recording for Children, but it lost to the cast album from The Electric Company. It was subsequently reissued without the book, stickers, or signs, first as Sesame Street 2: Original Cast, and then as a part of the 1977 Sesame Street Gold! limited-edition 2-record set, which also featured the first original cast recording from 1970.

Only the front cover has the long version of the album's title. The spine simply says "Sesame Street 2/Original Cast." The actual label says, "Sesame Street 2," with a picture of the Sesame Street sign on a regular Warner Bros. label. 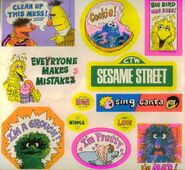 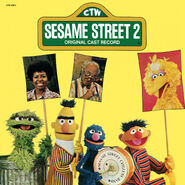 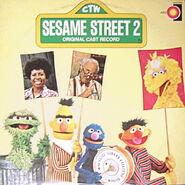