The Perry Como Winter Show was a Christmas special hosted by Perry Como, which aired on NBC on December 4th, 1972. The special featured the Muppets as guests, along with Joey Heatherton and Art Carney.

The opening sequence, with Perry going over sketches for the show with a designer, segues from the drawings to reveal each guest. The Muppets are represented by a furball with eyes, who prompts an audience response of "awws." This is the puppet's sole appearance in the special.

The special's loose plot involves Perry's wish to recreate his childhood Christmas experiences in Vermont by constructing a fictional Vermont town. Perry wanders through the set, cracking the occasional joke and singing various songs, while encountering Art Carney (as various townspeople, including a policeman and a sidewalk Santa Claus) and Joey Heatherton.

Approximately halfway through the special, Perry Como meets a group of young people (back-up singers) preparing to visit the ski lodge at Avalanche Mountain, and Perry and Joey tag along (with Carney as the ski-lift attendant). Upon arriving at the lodge, the Muppets make their auspicious entrance, as the Country Trio entertains the group with "You Don't Mess Around with Jim" (though Frank gets carried away with his bass-slapping and has to be slapped himself).

Perry tries to check in with manager King Goshposh, who immediately berates Perry for banging the service bell, for fear that it will set off an avalanche (a "Caution Avalanche Area" sign hangs over the front desk). They then argue about the distinction betwen the words "ring" and "bang." Goshposh finally turns Perry over to the room clerk, Featherstone in bellhop uniform. Featherstone prepares to register his guest and has him spell out his last name, but insists that "Como" doesn't have enough letters. He does, however, present him with a piece of tinsel, "compliments of the house," and sets Perry off on a musical medley (beginning with "It's Beginning to Look a Lot Like Christmas" and extending to "You've Got a Friend," interrupted briefly by Joey Heatherton's rendition of "Someone to Watch Over Me").

Art Carney (appearing as himself for the first time in the special) decides to see if the rooms are ready. He encounters the same resistance from Goshposh, who repeatedly shushes him. Perry and Joey offer the same warnings to an increasingly irate Art, as the entire lodge rumbles ominously and the avalanche warning sign quivers. To reiterate the need for caution, Goshposh urges the entire group to be quiet in the original song "Keep It Down." Perry, Joey, and even Art gradually join in, as does the backing chorus, growing wilder and more raucous as the song progresses, with encouragement from Goshposh and Featherstone. At the climax, the group finally shushes, but the Muppets utter a loud "Ooohh yeah!" which finally sets off the dreaded avalanche, destroying the set (punctuated by a stock Hanna-Barbera sound effect). 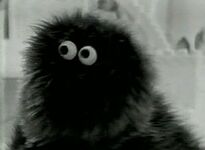 The Muppets' representative in the show opening. 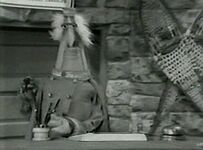 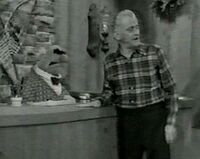 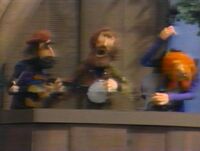 The Country Trio singing You Don't Mess Around with Jim in color.
Add a photo to this gallery

Retrieved from "https://muppet.fandom.com/wiki/The_Perry_Como_Winter_Show?oldid=1078456"
Community content is available under CC-BY-SA unless otherwise noted.