The Pipebangers are a group of Fraggles whose responsibility it is to bang the pipes in Fraggle Rock with sticks, an action which they believe makes water run into the Fraggle Pond. They wear vaguely pickle-shaped headgear and carry banging sticks. Led by the Archbanger Fraggle, they appeared in the Fraggle Rock episode "Let the Water Run." In the demo version of the "Fraggle Rock Theme," the main Fraggles acted as Pipebangers. 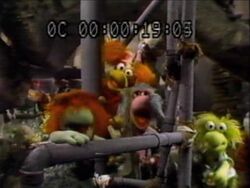 Add a photo to this gallery
Retrieved from "https://muppet.fandom.com/wiki/The_Pipebangers?oldid=1195992"
Community content is available under CC-BY-SA unless otherwise noted.