The Rock and Roll Monster appeared on The Ed Sullivan Show in 1966.

Ed Sullivan introduced the monster as a present from the Muppets: a small piece of fur in a box. It slowly grew into a three-headed monster (with built-in guitars and drums) that lip-synched to the song "Rock It to Me" as performed by New York garage group The Bruthers. After its performance, the monster slowly shrunk back to its small size, and was eaten by Sour Bird. In this appearance, it was performed by Jim Henson, Frank Oz, and Jerry Nelson.[1] The monster made a cameo appearance on The Muppets on Puppets from 1968. In this appearance, the middle head was replaced by the early version of Grover. 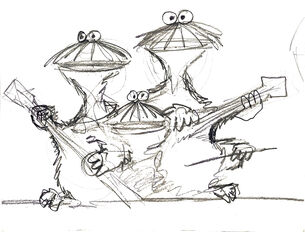 Jim Henson's design for the Rock and Roll Monster. 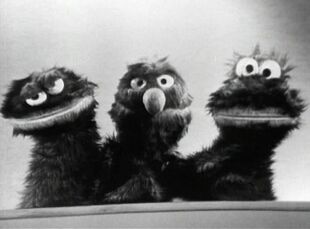 The Rock and Roll Monster on The Muppets On Puppets.
Add a photo to this gallery

Retrieved from "https://muppet.fandom.com/wiki/The_Rock_and_Roll_Monster?oldid=1253032"
Community content is available under CC-BY-SA unless otherwise noted.