The Sesame Street Monsters!, with the subtitle A Musical Monster-osity, was a showcase for the monsters from Sesame Street to perform their best-known songs. It was nominated for a Grammy Award for Best Recording for Children, but lost to The Little Prince.

Most songs on the album were written by David Axlerod and Sam Pottle. 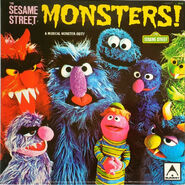