Michael K. Frith, who would later become a key member of Jim Henson's Muppet team, was the Editor-in-Chief of the Beginner Books series at Random House in the early 1970s. Frith oversaw the annual Sesame Street Storybooks, and it was this experience with the characters that led him to a long career with the Muppets.

In this book, Frith illustrated "Grover Above and Below," "Cookie Monster Up and Down," and "Grover Near and Far." He also contributed the two-page illustration for the book's endpapers, which includes small portraits of Henson and Oz looking out of the 123 Sesame Street windows, and a self-portrait of Frith on a poster.

Kelly Oechsli contributed "The Princess and the Cookie," "Ernie Dusts the Shelf," "Oscar Chooses a Pet", "The Diamond D and the Dreadful Dragon," "Ernie's Six Delicious Cookies," and "The Magic Apple."

Mary Lou Dettmer illustrated the story "The Boy, the Girl and the Jellybeans."

The contents of this book and four of its successors, would be combined and reprinted in the book series The Sesame Street Library. 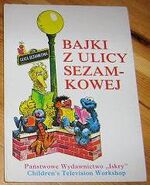 Retrieved from "https://muppet.fandom.com/wiki/The_Sesame_Street_Storybook?oldid=1373371"
Community content is available under CC-BY-SA unless otherwise noted.