The Sesame Street Storybook Alphabet is a Sesame Street alphabet book in which each letter corresponds to a fairy tale or nursery rhyme, as enacted by the Sesame Street Muppets. For example, the letter F stands for Frog, which represents "The Frog Prince".

Kermit the Frog makes a rare Sesame book appearance on the "Frog" page. A picture of Miss Piggy appears in the background in the entry for the letter P ("The Three Little Pigs").

The stories and rhymes adapted include the following: "Chicken Little," "Goldilocks and the Three Bears," "Jack and the Beanstalk," "Old Mother Hubbard," "The Ugly Duckling" (with a game of "Three of These Things"), "The Three Billy Goats Gruff," "Hansel and Gretel," "The Brave Little Tailor," "Old King Cole," "Mary Had a Little Lamb," "The Princess and the Pea," "Wee Willie Winkie," "The Gingerbread Man," "The Three Little Pigs," "Snow White and the Seven Dwarfs," "The Sleeping Beauty," "Twinkle, Twinkle, Little Star," "Rapunzel," "Rain, Rain, Go Away," "Cinderella," "The Princess Who Never Laughed," and "Sing a Song of Sixpence."

A rare appearance by Kermit 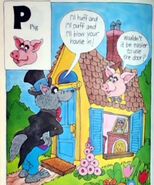 A framed photo of Miss Piggy in the house
Add a photo to this gallery
Retrieved from "https://muppet.fandom.com/wiki/The_Sesame_Street_Storybook_Alphabet?oldid=1275181"
Community content is available under CC-BY-SA unless otherwise noted.