Prairie Dawn receives a printing press from her Aunt Dusk and decides to print a newspaper. She decides to title the paper The Sesame Street Sun, and goes all over Sesame Street looking for stories, getting information from a number of residents. Betty Lou soon joins her, helping her with the printing. At the end of the story, a copy of the finished paper is displayed for the reader.

Prairie Dawn had previously taken on the role of a reporter in The Sesame Street Dictionary. 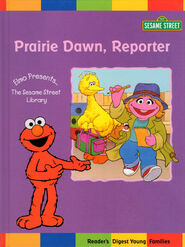 Retrieved from "https://muppet.fandom.com/wiki/The_Sesame_Street_Sun?oldid=1078676"
Community content is available under CC-BY-SA unless otherwise noted.