"The Sneeze Song" is a Sesame Street song in season 22, sung by a cow, with a pig, a sheep, and a horse providing back up.

The song teaches the natural reaction of the nose during a cold or flu, or when exposed to an allergic reaction or tickle in the nostrils, leading to a release of those toxins with a sneeze, with the animals demonstrating sneezes throughout the song, eventually ending with the cow sneezing the back up animals out of sight.

This song was later remade with Ruthie and a trio of Anything Muppets (performed by Jerry Nelson, David Rudman and Kevin Clash). (First: Episode 3845) 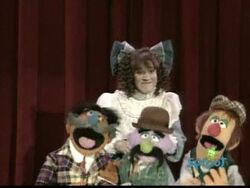 Remake
Add a photo to this gallery

Retrieved from "https://muppet.fandom.com/wiki/The_Sneeze_Song?oldid=1295843"
Community content is available under CC-BY-SA unless otherwise noted.