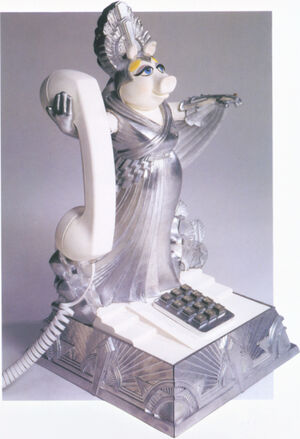 A Miss Piggy novelty telephone, officially titled The Spirit of the Telephone, was designed in 1983. This touchtone phone featured Miss Piggy, draped in silver and resembling some ancient goddess, as a full figure holding the receiver.

Michael K. Frith designed the phone, and a 17-inch plaster model was constructed by Art Buroff and Jim Mahon. The project fell through, however, and the telephone was never marketed.

The telephone can be seen in Miss Piggy's Hollywood, as part of Dudley Moore's Miss Piggy collection, and was featured in The Ubiquitous Pig.

Frith's sketch
Add a photo to this gallery

A Kermit the Frog telephone was released in 1983 by American Telecommunications.

Retrieved from "https://muppet.fandom.com/wiki/The_Spirit_of_the_Telephone?oldid=1288344"
Community content is available under CC-BY-SA unless otherwise noted.