Jim Henson Interactive announced a video game version of The StoryTeller at the 2000 Electronic Entertainment Expo. The game was in development with Codemasters and scheduled for a Spring 2001 release on Sony's PSone console.

From the press release:

In the game, players take control of the main character in stories and tales based on the show. Players battle evil monsters, solve cunning riddles, and explore strange and beautiful lands. The game is entwined with the twisting tale spun by the Storyteller himself. The game will combine fantastic legends, and myths with cutting-edge graphics and excellent gameplay.[1]

Characters depicted in advance art included the Heartless Giant, the Griffin, the Troll, devils, and Pond Sprite, as well as a skeleton.

As the player you take control of the main character of each of the Storytellers tales, battling evil monsters, solving cunning riddles and puzzles, exploring the strange and beautiful land as you strive to complete your quests. Just like in the TV programme, the whole game is entwined within the classic twisting storyline of the Storyteller himself. Not only will he set the scene for your quest but also narrate as you progress through the game, providing atmosphere to the scenes, warning you of potential dangers and giving you guidance when you are in difficulty.[2]

With the best place by the fire, as always, kept for The Storyteller, we begin our epic journey through the good, the evil and those many places in between.

"It begins a thousand miles from anywhere, with a soldier, an honest soul, with nothing in his pocket except three dried biscuits for the long trudge home."

"At length he emerged into the moonlight. Hither and thither the devils tore about - searching, sniffing, out for his blood"

"There were no sounds: no breeze, or birdsong or crickets: It was quiet here, perhaps even unnaturally quiet. Mustering all his courage he stepped into the darkness: he knew not what dangers lay within?"

"In the flittering flame of the torches, the Soldier could make out figures scurrying here and there. It soon became clear that these hell-born hooligans had but one goal: to bar the Soldier from the palace."

"Stepping off the stairs and into the grand hall, something, the faded splendour, the creeping decrepitude, gave our Soldier the spooks"

"The Soldier found himself in a dark, dank room; so dark he could hardly see his hand before his face and so dank he could only just smell the vinegary tang of old spilt wine."
Add a photo to this gallery

Our guide and narrator throughout the epic quests. The Storyteller sits in his chair by the fire and relates his many stories and fables, aided by his trusty dog.

The Land that the Storyteller speaks of is home to many nefarious bandits and brigands; but not all are as they appear. Be careful to listen to the tale's true meaning as you explore.

The hero of our tale, The Soldier, tackles many foes on his journey. From goblins to dragons to witches to griffins to trolls and even mischievous little devils.

The landscape is wide and varied. Our Soldier will set his eyes on old decrepit castles, a giant's over-sized garden, the Griffins mountainous lair and he will eventually traverse the realm of the dead for a showdown with Death himself.

With his sword in his hand and his sack by his side The Soldier sets off across The Land. His quest is unknown, but our Soldier is a good man with only good deeds in his heart
Add a photo to this gallery 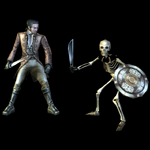 "Skin crawling, hair tingling, the Soldier watched horrified the resurrection of what once was dead. It clawed its way out from its grave; a thing of bones and teeth and hate, innocent." 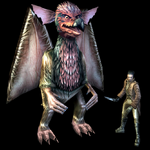 "Suddenly a terrible vision appeared before him: it had the body of a huge beast, razor-sharp claws and a fearsome beak. He had found the fabled Griffin." 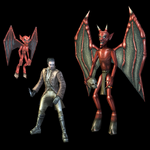 "Cackling laughter, high and cruel, echoed through the once-beautiful palace. Peering up at the rafters the Soldier knew the devils would be waiting for him in the shadows" 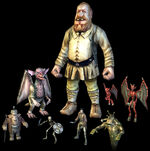 "The Soldier was almost paralysed by fear: somewhere close by he could hear footfalls, each one like a tree falling. Then, out of nowhere, the giant loomed into view, as tall as four men."
Add a photo to this gallery

Retrieved from "https://muppet.fandom.com/wiki/The_StoryTeller_(video_game)?oldid=1078780"
Community content is available under CC-BY-SA unless otherwise noted.