The Super Foods are a team of superhero foods, who appear in the Sesame Street resource video, Food for Thought. Each member represents a different food group.

They appear all over the street, helping out citizens when Super Grover can't. Unlike Grover's traditional methods of saving the day, the Super Foods help out by providing healthy tips, suggesting Elmo tries some of his kiwi to see if he'll like it or helping the Bear Family see that a meal together is the best way to get together. Although Super Grover finds them a nuisance, they end up helping him gain some super strength by eating some breakfast.

Their performers include Stephanie D'Abruzzo (the cheese), Kevin Clash (the broccoli), Leslie Carrara-Rudolph (the whole-wheat bread) and Matt Vogel (the banana). The cheese and banana reappeared in a new scene for Episode 5113, which repurposed footage from the original video as its street story. 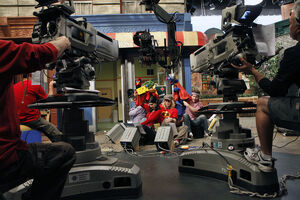 Behind the scenes
Community content is available under CC-BY-SA unless otherwise noted.
Advertisement