Nearly all Swedish Chef sketches begin with him in a kitchen, waving some utensils while singing his signature song[1] in a trademark mock Swedish, a semi-comprehensible gibberish which parodies the characteristic vowel sounds of Swedish. The last line of the song is always "Børk! Børk! Børk!" and is punctuated by the Chef throwing the utensils over his shoulder to crash into the crockery behind him. (Although the letter "ø" does not exist in Swedish—it is a Danish/Norwegian letter whose Swedish equivalent is "ö"—the Chef's trademark word is nearly always spelled "Børk.")

After this introduction, the Chef continues to speak gibberish while preparing a particular recipe. His commentary is spiced with the occasional English word to clue the viewer in to what he is attempting. These clues are necessary as he frequently uses unorthodox culinary equipment (firearms, tennis rackets, etc.) to prepare his dishes. The sketch typically degenerates into a slapstick finale, and he often winds up in pitched battle with his ingredients, from Lobster Banditos to a Japanese Cake. The Swedish Chef has also appeared, at least briefly, in every Muppet film to date. He was put in charge of running the film projector in The Muppet Movie and Muppet*Vision 3D. In A Muppet Family Christmas, he attempts to cook the Christmas turkey, then sets his sights on Big Bird instead.

The Swedish Chef's popularity led to his own cereal, Cröonchy Stars, in 1988. Commercials for the product featured the Chef, up to his usual antics. In the 1990s, the Swedish Chef appeared regularly on Donna's Day starting in the second season.

In episode 316, Danny Kaye, portraying the chef's uncle in a sketch, claims that the Swedish Chef's first name is Tom. However, since Kaye was not a blood relative in reality, this information may be considered apocryphal. Many years later on The Muppets, Christina Applegate misinterprets his name as Megan in "Bear Left Then Bear Write", when he was actually just saying, "me, me."[2]

Jim Henson had previously explored the idea of a funny foreign chef at the US Food Fair that took place in Hamburg, Germany in 1961. In a sketch called "The Chef's Salad," Sam and Friends character Omar prepared a flaming salad while speaking in some quite comprehensible mock German that Henson and Jerry Juhl had previously scribbled down in phonetics.[3][4] Another early Muppet chef was Chef Bernardi, who hastily whipped up a sixty-second salad flambé in a 1966 appearance on The Mike Douglas Show. Like the later Swedish Chef, Henson was the main performer of Bernardi, while Frank Oz performed his hands.

According to Brian Henson in one of his introductions for The Muppet Show, "Jim Henson had this tape that he used to play which was 'How to Speak Mock Swedish'. And he used to drive to work and I used to ride with him a lot. And he would drive to work trying to make a chicken sandwich in Mock Swedish or make a turkey casserole in Mock Swedish. It was the most ridiculous thing you had ever seen. And people at traffic lights used to stop and sort of look at him a little crazy. But that was the roots of the character that would eventually become the Swedish Chef". 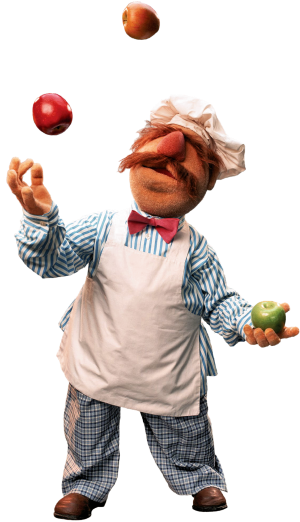 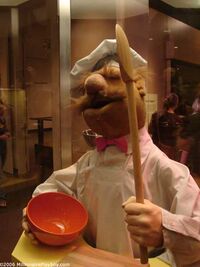 Swedish Chef at the Smithsonian 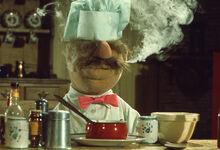 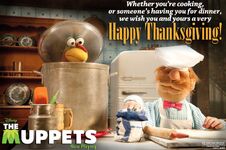 Start a Discussion Discussions about The Swedish Chef