thumb|300px|Miss Piggy & Sharon Osbourne hash it out. thumb|right|300px|Elmo's appearance on September 20, 2012. The Talk is a CBS talk show produced and hosted by actress Sara Gilbert, co-hosted by Sharon Osbourne, Julie Chen, Sheryl Underwood and Aisha Tyler. The show debuted in 2010. 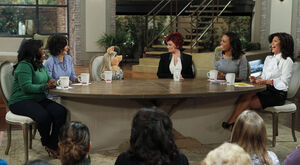 Miss Piggy and the women of The Talk 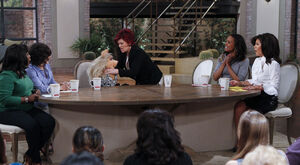 Miss Piggy and Sharon Osbourne fight over Ozzy and Kermit

Wikipedia has an article related to:
The Talk
Retrieved from "https://muppet.fandom.com/wiki/The_Talk?oldid=678046"
Community content is available under CC-BY-SA unless otherwise noted.