The Tarnish Brothers are three Anything Muppets who have appeared several times on Sesame Street as back-up singers.

They first appeared in 1974 singing "I Just Adore Four" with Big Bird (referred to here as "The Happy Squares"). In this appearance the Tarnish Brothers consisted of one Pumpkin, one Fat Blue and one Orange Gold Anything Muppet. All three had slick, black hair and thin mustaches, and wore the blue velvet tuxedos that they would wear in all their subsequent performances. They were performed here by Frank Oz, Jerry Nelson, and Richard Hunt.

When the Tarnish Brothers appeared as back-up singers on "This Frog" and "Salida," the Orange Gold character had been dropped in favor of a Lavender one. Aside from this change, however, their look stayed mostly the same. Their eyelids, however, which had all been purple in their first appearance, now matched the color of each character's skin.

In "This Frog," the characters are once again puppeteered by Frank Oz (Fat Blue), Jerry Nelson (Pumpkin), and Richard Hunt (Lavender),[1] while Nelson, Hunt, and Christopher Cerf provided the vocals.

The Lavender and Pumpkin Tarnish Brothers also sang back-up for Olivia in "One Two Blues." Here, they were performed by Brian Muehl and Michael Earl. 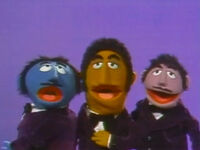 as seen in "This Frog"

as seen in "Salida" 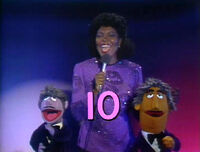 as seen in "One Two Blues"