The Torkelsons was an NBC family sitcom which ran from September 9, 1991 to June 13, 1992. Developed by Michael Jacobs and using much of the same technical crew as Dinosaurs, the series focused on Millicent Torkelson (Connie Ray), whose husband walked out on her leaving her to work and raise five children (notably oldest Dorothy Jane). To make ends meet, the Torkelsons take in boarder Wesley Hodges (William Schallert).

The episode "Educating Millicent" (December 22, 1991) featured a special guest appearance by Kevin Clash as Elmo, in one of the puppet's earliest prime-time commercial guest spots. Youngest child Mary Sue Torkelson has a stuffed Elmo toy, whose head Millicent has to sew back on. The primary plot hinges on the discovery that Millicent dropped out of high school (pregnant with her oldest child). Mary Sue talks to Elmo about the issues of whether or not to go on from kindergarten to high school, and Elmo observes that talking to one's self (as opposed to a stuffed Muppet which springs to life in one's mind) "would be crazy."

Later, exhausted from studying to take the high school equivalency test, Millicent is unnerved when Elmo suddenly begins talking to her and urges her not to quit. She insists he is "a manifestation of my own fatigue," but the red monster retorts that "Elmo is Elmo." He joins in Millicent's manic laughter and echoes Mary Sue's exhortation to get her diploma. Mary Sue returns to retrieve her toy, and Elmo thanks Millicent for putting his head back on straight (earning a "Same to you" reply).

For the second season in 1992, the series was retooled as Almost Home, with Millicent moving to Seattle, losing the two middle children and the boarder in the interim, and becoming a nanny for a single dad with two children. 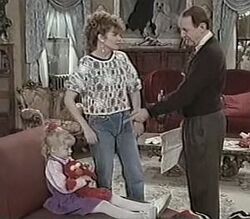 Millicent repairs a beheaded Elmo toy on The Torkelsons 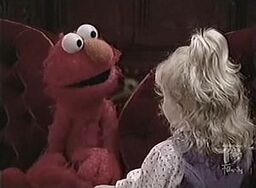 Wikipedia has an article related to:
The Torkelsons
Community content is available under CC-BY-SA unless otherwise noted.
Advertisement