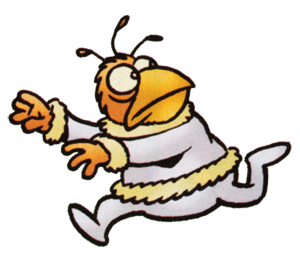 The Ubiquitous Quilp is an orange, bird-like creature who speaks almost exclusively in sounds that start with "Qu."

In a self-titled, single-panel sketch in "Fozzie's Story," the second issue of The Muppet Show Comic Book, the Quilp discovers an alligator in the bathtub on the top floor of his apartment building ("Quoo Qua Quee?") before fleeing down the stairs ("Quee Qua Quoo!"), down an elevator ("Quay Quee Qua? Quox Quix Quax..."), down a fireman's pole ("Quonk Quink Quank!"), and out the front door ("QUOCK!!"), straight into the mouth of the alligator, who had taken a shortcut out the second story window ("Mmmm...Quunchy!").

It appears that the Quilp is not the only member of his species, as a similar looking creature appears on the television screen of the man who lives on the ground floor ("Quid Pro Quo."). Of course, it is also possible that the Quilp is one of a kind and also a celebrity lawyer.

The name Quilp originated in Charles Dickens' The Old Curiosity Shop, where it was used for the villainous moneylender who serves as the novel's antagonist.

Retrieved from "https://muppet.fandom.com/wiki/The_Ubiquitous_Quilp?oldid=1180315"
Community content is available under CC-BY-SA unless otherwise noted.